What is a murder hornet?

Murder hornet is a nickname for the Asian giant hornet, a species of hornet native to eastern and southeastern Asia. They are the world’s largest wasp. Murder hornets are especially lethal to honeybee colonies, and are considered an invasive species outside (and even some parts of) Asia.

Hornets are a type of wasp, which are flying, stinging insects similar to bees. To murder is to kill something, and murder hornets can kill large numbers of honeybees by—gruesomely—decapitating them. Their sting is powerful enough to kill humans.

Murder hornets were already notorious in Japan before they were discovered to have arrived in the United States in May 2020. Murder hornets are an invasive species in the U.S., and many news outlets used their menacing nickname in stories about the danger they pose to the already declining United States honeybee populations. A possible invasion of murder hornets is concerning because honeybees are vital to our ecosystems and food supply.

Where does murder hornet come from? 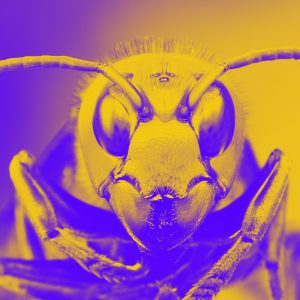 The nickname murder hornet for the Asian giant hornet has been attributed to Japanese entomologists (insect scientists) in a New York Times article in May 2020. According to researcher Jun-ichi Takahashi, they earned this name because they attack is a mass. That means they can expose a person to numerous toxic stings all at once, which can be fatal if someone is allergic to insect stings.

Murder hornet saw very little use on English social media prior to the New York Times article, but the name instantly caught on after it and other news stories used the eye-catching nickname in headlines. Although it seemed unlikely the story of invasive hornets would become viral, the ominous nickname—coupled with the gallows humor that 2020 was already horrible enough, thanks to COVID-19—appears to have played a part in the sudden interest in the murder hornet story.

Let’s delve into some facts. The murder hornet’s common name is the Asian giant hornet; it’s scientific name is Vespa mandarinia. Asian giant hornets are the largest hornets in the world. The body of queens can be over 5 cm (about 2 inches) in length, their wingspan able to exceed 7 cm (nearly 3 inches). They are omnivores, and primarily feed on smaller insects and tree sap. 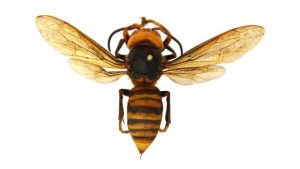 Infamous among researchers and beekeepers, the Asian giant hornet is the only species of hornet to organize raids on other colonies of bees and wasps. Their three-step strategy to these raids involves what zoologists refer (oh-so pleasantly) to as the hunter stage, the slaughter stage, and the occupation stage, in which an entire colony is hunted down, destroyed, and fed to the hornet larvae.

In addition, Asian giant hornets are venomous, and their stings are responsible for up to 50 deaths in Japan each year. Even if a person is not killed, the sting of the Asian giant hornet is noted as being excruciatingly painful. YouTube personality Nathaniel “Coyote” Peterson compared the sting to sticking a burning hot poker in your arm for six hours after he allowed himself to be stung by the hornet (and immediately received medical attention).

In May 2020, murder hornets were discovered in the state of Washington by the Washington State Department of Agriculture (WSDA). The WSDA theorized that the hornets managed to reach the United States by stowing away on international cargo.

While Japanese honeybees have adapted strategies to fight off the murder hornets, honeybees in the U.S. have so far been defenseless against them, and so the WSDA considers the hornets an invasive species. The WSDA encouraged news coverage of the hornets so people would be able to recognize them and help in exterminating the hornet populations before they could cause widespread damage to honeybee populations.

ok now I’ve seen murder hornets and I’m wondering how big a bug has to get before we start calling it a bird
@mikpinkustink, May 2020
“Murder hornets" have now entered the U.S.—and they could decimate the honeybee population
Li Cohen, CBS News (headline), May 2020

Thanks to their scary nickname and potential invasion of the United States during the already chaotic year of 2020, murder hornets became a viral sensation, with people making jokes and memes about how terrifying they were.

waking up to the murder hornet news pic.twitter.com/ZSUx1KMTgc

I for one, welcome our new murder hornet overlords.

Just when you thought 2020 couldn't get worse, here comes the murder hornet: pic.twitter.com/CS35Rvuxbi

What are some other words related to murder hornet?

This is not meant to be a formal definition of murder hornet like most terms we define on Dictionary.com, but is rather an informal word summary that hopefully touches upon the key aspects of the meaning and usage of murder hornet that will help our users expand their word mastery.