What does my mom mean?

Outside its literal use in everyday speech and writing, my mom is a self-deprecating punchline and catchphrase of the oddball character Muscle Man from the TV cartoon Regular Show.

Where does my mom come from? 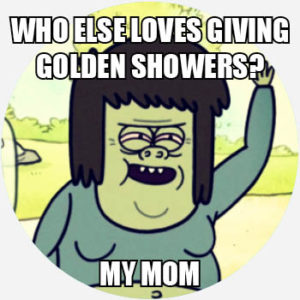 Created by J.G. Quintel and premiering in 2010, the cartoon The Regular Show follows twenty-something best friends Mordecai (a blue jay) and Rigby (a raccoon), work-shirking groundskeepers at a park. One of their coworkers is a green-skinned, strong-yet-obese minor character Muscle Man (voiced by Sam Marin).

Muscle Man is officially introduced in the second episode of the first season, where he makes his first my mom joke: “You know who likes special entertainment like that? MY MOM!” After each groan-worthy punchline, Muscle Man high-fives fellow coworker High Five Ghost. Another example goes: “You know who else needs supervision? MY MOM!”

The my mom punchline ironically inverts the your mom or yo’ mama joke, a schoolyard comeback since the 1950s, ironically making himself the butt of his own joke. For, the mom joke structure takes an utterance in casual conversation and turns it into an insult to the intelligence or integrity of another person’s mother—not one’s own. Oblivious to its backfiring, Muscle Man’s pathetic-seeming my mom catchphrase fits with his character, a has-been bodybuilder who’s let himself go.

As the show progresses, my mom becomes an inside joke on the show, with Muscle Man responding to almost every utterance with my mom, as notably featured on a 2011 episode called “My Mom,” which focuses on the character’s compulsive and obnoxious overuse of the joke.

While the Regular Show ended in 2017, Muscle Man’s bizarre my mom wisecracks were very popular and widely quoted among viewers. As one fan tweeted in March, 2018: “The ‘my mom’ jokes in Regular Show might be the dumbest thing that consistently get a laugh from me.”

Examples of my mom

lmao hell yeah . DO YOU KNOW WHO ELSE …..  “MY MOM” LMFAO
@iam_brvndee, November, 2012
You know who else finds Muscle Man's "My mom!" jokes funny?
McMarbles, GameFAQs (forum), March, 2014
Sometimes I want to make a MuscleMan twitter bot that will read tweets with statements, and inject “You know who else___? MY MOM!
@aaroneiche, August, 2016
SEE MORE EXAMPLES

Who uses my mom?

The phrase my mom, of course, is used widely in speech and writing by a speaker or writer colloquially referring to their mother.

Fans of the Regular Show often quote or allude to my mom jokes in conservation and online, especially in GIFs and memes. Some even make up their own among their friends as deliberately bad jokes and in playful imitation of Muscle Man’s absurdity.

Muscle Man’s my mom jokes follow a particular structure, it should be noted. Jumping off some topic in the flow of conversation, it begins “You know who else…?” and ends in “MY MOM!”

This is not meant to be a formal definition of my mom like most terms we define on Dictionary.com, but is rather an informal word summary that hopefully touches upon the key aspects of the meaning and usage of my mom that will help our users expand their word mastery.