What does National Bacon Day mean?

Baconophiles don’t dispute their love of the food, but they do dispute what day National Bacon Day falls on, including dates in January, February, August, and December.

Where does National Bacon Day come from? 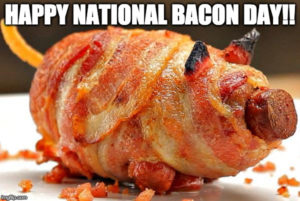 There have actually been a few National Bacon Days over the years. One of the earliest documented National Bacon Days dates to 1997. Friends Danya Goodman and Meff Leonard wanted a non-denominational gift-giving holiday at the end of the year. So, in additional tribute to the famously bacon-obsessed Homer Simpson, they named it Bacon Day and celebrated it on December 30th. 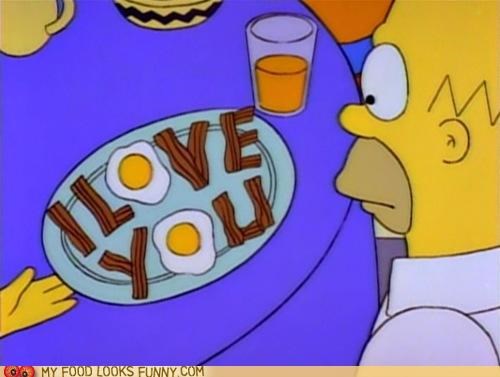 The origins of other International or National Bacon Days are disputed. It’s variously celebrated on the first Saturday in January after New Year’s Day, February 19th, or the Saturday before Labor Day. Some attribute it to college students in Bedford, Massachusetts. Others claim students from the University of Colorado in Boulder started it in 2004.

It’s National Bacon Day (aka every day) so I decided to wrap my favorite meat around my 3rd favorite meat for the fantastic bacon wrapped filet. Side dish of bacon wrapped jalapeño poppers on the @TraegerGrills ain’t too shabby either 🥓🥩🥓 pic.twitter.com/myx1ui30MU

The reasons for the variation in the dates for National Bacon Day is because it isn’t an official holiday. But hey, anything is still possible.

Holy Foxy Troxy!!! It's National Bacon Day!!!!! Lord honey what more could you want????? #Countrybling
@lowcarb77, December, 2017
Looking for a way to celebrate National Bacon Day on-the-go? Head over to Crif Dogs and order a Good Morning Dog. This bacon wrapped baby will cost you less than $6 and it comes with melted cheese and a fried egg – the ideal comfort food combination.
Carly Petrone, CBS, December, 2017

National Bacon Day is celebrated as an occasion to fry up some bacon, enjoy its greasy, salty goodness, and drop some “#NationalBaconDay” hashtags and bacon emoji 🥓 on social media.

Today is National Bacon Day…that’s all. 🥓🥓🥓

Whatever day it falls on, restaurants will offer special bacon-forward dishes on that day.

Cable news, which loves to fill its airtime with themed holidays, will provide special bacon recipes on National Bacon Day.

National Bacon Day is sometimes celebrated as International Bacon Day, observed as it is in other countries like Canada, the UK, and Ireland. Of course, bacon in those countries isn’t the same cut of pork as American-styled bacon. But bacon lovers, ultimately, don’t care as long as they get to eat it. Jewish and Muslim people, however …

This is not meant to be a formal definition of National Bacon Day like most terms we define on Dictionary.com, but is rather an informal word summary that hopefully touches upon the key aspects of the meaning and usage of National Bacon Day that will help our users expand their word mastery.