What is National Boyfriend Day?

Falling on October 3, National Boyfriend Day is an unofficial holiday devoted to celebrating, well, boyfriends. This usually means an unmarried romantic partner, but it can also apply to husbands, friends, or, if you are a certain kind of person, cats.

Where does National Boyfriend Day come from? 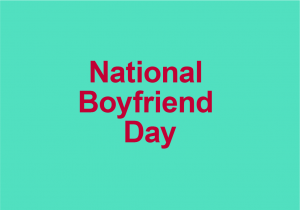 National Boyfriend Day apparently began on October 3, 2012, started by a group of Twitter users who decided to write appreciation posts to their boyfriends with the hashtag #NationalBoyfriendDay.

Happy #nationalboyfriendday to the best boyfriend in the world. I can always count on you to make me smile. http://t.co/1qJJ8rZp

It seems the tweeters seized not on German National Unity Day but on Mean Girls Day, which also falls on October 3 thanks to an oft-quoted scene in the 2004 comedy in which Cady Heron (Lindsay Lohan) is asked by her future boyfriend what day it is. It was, yes, October 3.

Since 2012, National Boyfriend Day has joined Valentine’s Day (February 14) and Sweetest Day (October 20) as a just-because occasion to do and say nice things for your sweetheart—here, boyfriends.

As an unofficial holiday, you’re not going to see special National Boyfriend Day candies and decorations out in the world, though don’t put it past anyone to capitalize on it. It’s more seen on social media as a hashtag, #NationalBoyfriendDay, with posts and pictures about one’s boo or in online articles tying into the event or using it as a peg for their brand.

And oh, girlfriends get their day, too. National Girlfriend Day is on August 1.

Today is National Boyfriend Day, a moment to celebrate our partners in life and love, which has me thinking about all of the wonderful ways in which having a vegan boyfriend is amazing.
Maya Gottfried, VegNews, October 2017
The bad boy basketball player who can be tamed by the right significant other is what people dream of on National Boyfriend Day … and all other days. He’s sexy, charming, confident with a soft and loving and sweet side that he keeps close to his chest and only lets out around the one he cares most about.
Rachael Ellenbogen, International Business Times, October 3, 2017

National Boyfriend Day is meant to be a fun and positive holiday, mostly focused on expressing loving and sentimental appreciation for boyfriends.

Plenty of single men and women, though, joke about their relationship status or bad exes on National Boyfriend Day.