What does ratio mean?

On the social media platform Twitter, a ratio, or getting ratioed, is when replies to a tweet vastly outnumber likes or retweets. This means people are objecting to the tweet and considering its content bad.

Where does ratio come from? 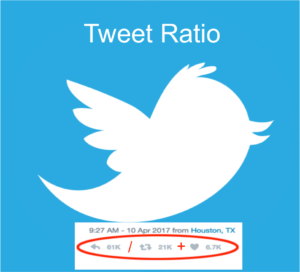 You might remember from math class that a ratio is a proportional relationship between two numbers. For example, if I have two carrots for every one apple, my carrot-to-apple ratio is 2:1, or 2/1 as a fraction.

In the Twittersphere, a ratio specifically refers to the number of replies to a tweet versus the number of likes and retweets. The importance of this ratio was first called out by user @85mf, who noted on March 7, 2017 that US congressman Jason Chaffetz had a tweet with 701 replies and only 23 retweets and 108 likes. @85mf commented: “Nothing on this site makes me happier than reply-to-RT ratios like this. That is the ratio of someone who fuuuuucked up.”

Nothing on this site makes me happier than reply-to-RT ratios like this. That is the ratio of someone who fuuuuucked up. pic.twitter.com/thnnaZe762

In April 2017, an article in Esquire, “How to Know If You’ve Sent a Horrible Tweet: A Deep Dive into The Ratio,” gave a longer description of this phenomenon. Essentially, showing you like something on Twitter is easy: You simply like or retweet the comment. It takes more effort, however, to leave a negative comment, so, if lots of people do so, then it must be a sign the tweet has really stepped in it.

By fall 2017, noun ratio had been verbed, as in I’ve been ratioed or Let’s ratio this guy.

Let’s ratio Pence and not quote tweet him a billion times, IMO

Before Twitter analytics became a thing, having something that was well-ratioed, like ingredients on a sandwich, meant it was well-proportioned.

Actually had a perfectly-ratioed Choclate chip banana nut muffin today! I think it's going to be a good day #winning #midterms #justlovefood

But since 2017, there is little positive about being ratioed. It means your tweet has been taken down by the hive mind. Below is a tweet from United Airlines commenting on the April 2017 incident in which a doctor was dragged off a plane. It’s ratio, as of the publication of this entry? Over 58,000: 27,000. Yeah, folks were not having United’s response to the incident.

look at the ratio literally no one supports this girl yikes
@bhxcyphers, November 2018
It’s widely considered that if you have a ratio of 2:1 for replies to retweets, you’ve done something wrong. So if your ratio gets higher than that, you know you’re in trouble.
Rachel Hosie, The Independent (UK), April 2017

Ratios are obviously found all over math and science and their uncountable real-world applications, where it’s just another way of expressing the proportional relationship between two numbers.

But on social media, a ratio refers specifically to this relationship between comments, retweets, and likes, and implying a post is objectionable.

Here for the ratio, and to ask again when you'll hire another public editor or reader advocate.

This is embarrassing for @nytimes and tedious for readers. pic.twitter.com/uDnuY3JK0k

While it started on Twitter and is most commonly found there, users’ posts can be ratioed on nearly any social media platform, including Reddit and Instagram.

The definition has also expanded to refer to the ratio of the number of people a user follows based on how many people follow them—a sign of internet popularity as well (or lack thereof).

Getting ratioed on Twitter has become such a trend that it’s spawned its own hashtag, #ratioed, which salty tweeters use to note particularly unpopular tweets.

Looks like they're getting appropriately #ratioed over this tripe.

In the gaming world, your ratio more likely refers to your k/d ratio—your kill-to-death ratio, meaning how many players you’ve killed versus how many times you’ve been killed.

This is not meant to be a formal definition of ratio like most terms we define on Dictionary.com, but is rather an informal word summary that hopefully touches upon the key aspects of the meaning and usage of ratio that will help our users expand their word mastery.