Rookie of the Year

What does Rookie of the Year mean?

Rookie of the Year is an award given to an athlete judged most accomplished in the first season of their sport.

Where does Rookie of the Year come from? 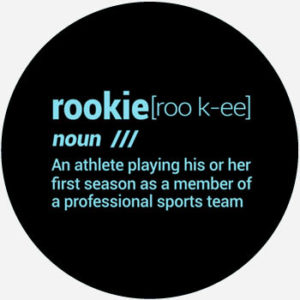 The word rookie is no newcomer to the English language. The term is recorded as early as the 1860s for a “new recruit” to the military or a police force. Some think it was the very word recruit that was shortened into rookie. Others see influence in an old verb rook, “to cheat” someone, supposedly alluding to how old-timers can easily trick gullible noobs.

Whatever its exact origins, rookie took the field in the early 1900s, when the term referred to “new members of a sports teams,” particularly professionals. (It’s around this same time rookie started naming any “beginner.”) Early in its career, rookie saw especial use in baseball, America’s great pastime and apparent progenitor of Rookie of the Year as phrase and praise.

A 1921 feature in the sports pages of Florida’s The Pensacola Journal christened Riggs Stephenson—a 23-year-old in his first year playing second base for Cleveland Indians—as a “most remarkable rookie of the year.” Baseball wouldn’t formally honor any sluggers as Rookie  of the Year until the 1940s though. 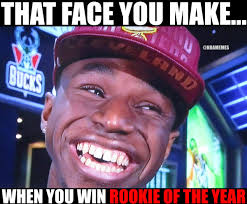 That year, the Chicago chapter of the Baseball Writers’ Association of America (BBWAA) presented its own Rookie of the Year prize and did so until 1947, when it ceded to the BBWAA’s national award, officially recognized by Major League Baseball (MLB). Its first honoree was Brooklyn Dodgers’ #42, Jackie Robinson, a legend inside the ballpark and out for breaking baseball’s color barrier. The MLB named its Rookie of the Year award the Jackie Robinson Award in his honor in 1987.

Basketball wasn’t far behind … courtside sportswriters named a pro basketball player Rookie of the Year starting in the 1947–1948 season before the National Basketball Association (NBA) inaugurated its official award in 1952–53 season. Called the Eddie Gottlieb Trophy (whose namesake was the rookie coach for the Philadelphia Warriors, now playing in the Golden State), the NBA Rookie of the Year has crowned some of the giants of the game, including Wilt Chamberlain, Michael Jordan, and LeBron James.

The title has not been without contention, though. In the 2017–18 NBA season, the two leading nominees, the Philadelphia 76ers’ Ben Simmons and Utah Jazz’s Donovan “Spida” Mitchell, jawed over the very definition of rookie. Mitchell playfully trash-talked Simmons by claiming his competitor was not a true rookie, as an injury benched Simmons during what was technically his first season in 2016. Spida, ever the acrobat on the hardwood, showed off his reference skills when he sported an Adidas hoodie boasting our Dictionary.com definition of rookie. The experts countered that, while 2017–18 was technically the second season for Simmons, he still qualified as a rookie because he didn’t play a single second of the shot clock that year.

Rookie of the Year has also captured the popular imagination, such as in the 1993 feel-good film Rookie of the Year, following a Little Leaguer’s (Thomas Ian Nicholas) freak foray into the big leagues, based on the 1952 Roogie’s Bump. North Carolina-based indie rockers took Rookie of the Year as their band-name when they formed in 2002.

Other sports variously award Rookie of the Year awards including Major League Soccer, NASCAR, the National Football League, the National Hockey League, and Women’s Professional Soccer. In many cases, including for the MLB and NBA, a Rookie of the Year is chosen based on total points as awarded by sportswriters and sportscasters who cover the sport.

Different fields also give out Rookie of the Year awards, notably including the Korean Music Awards, whose Rookie of the Year has been lauding best new arists in South Korea since 2004. Since 2011, the Sports Illustrated Swimsuit Issue has named a first-time swimsuit model Rookie of the Year, with Ashley Graham making news as the magazine’s first plus-size model to appear in the scantily clad pages as its 2016 Rookie of the Year.

Examples of Rookie of the Year

He doesn't know it yet, but he won Rookie of the Year at the Robotics tournament!...
@BHECDPKG, Jun,e 2018
Just ask Jazmine Reeves, 2014 Rookie of the Year for the NWSL's Boston Breakers, who told The Atlantic she left professional soccer because she was unable to get by on her $11,000 salary.
Alicia Lorene Johnson, Bustle, June, 2015
Imagine it’s 2019. You see a very talented group snatching first wins and rookie of the year awards. The group has four talented boys with godly visuals who can sing well, rap, choreograph, compose, and produce good music on their own. The group is BNM Boys. And they are legends.
@dongnyuns, May, 2018
SEE MORE EXAMPLES

Who uses Rookie of the Year?

Rookie of the Year Winner can name a specific winner or the contest in general. It’s most often used in the context of various annual sports awards, from the amateur to professional. Since at least the late 2000s, Rookie of the Year has been abbreviated as ROTY or “#ROTY” on social media.

However, other disciplines and institutions like to name Rookies of the Year to distinguish first-year students, employees, or other novices and celebrate their achievements.

EMPLOYEE FEATURE WEDNESDAY: Today we feature Brian ‘B Smooth’ Smith, our 2017 Rookie of the Year and one of the consistent names on our leader board. Brian has been with IEL for 1.5 years and enjoys building lasting relationships with his customers. #iel #workhardplayhard pic.twitter.com/33N1zCo1Jf

More loosely, people may refer to any beginner that is distinguished as a Rookie of the Year, as Joelle James so sings about a newly famous lover in her 2017 track “Rookie of the Year” with Chris Brown: “You’re my rookie of the year / All the odds are on you.”

This is not meant to be a formal definition of Rookie of the Year like most terms we define on Dictionary.com, but is rather an informal word summary that hopefully touches upon the key aspects of the meaning and usage of Rookie of the Year that will help our users expand their word mastery.