Feedback
Rookie of the Year
S.T.A.L.K.E.R.

What is the Rooney Rule?

The Rooney Rule is a policy in the NFL that requires a team to interview at least one minority candidate for a head coaching job, general manager position, or other front office position.

Where does Rooney Rule come from? 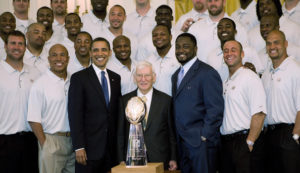 In 2002, attorneys Johnnie Cochran and Cyrus Mehri released a report that detailed unfair hiring and firing practices regarding Black coaches in the National Football League (NFL). In response, Paul Tagliabue, then Commissioner of the NFL, announced the creation of a diversity committee to investigate the NFL’s hiring policies.

The committee was first headed by Pittsburgh Steelers franchise owner Dan Rooney. Among other things, he pushed for a rule that NFL teams must interview at least one minority candidate when interviewing head coaches. This rule was referred to by reporters and players as the Rooney Rule, after Dan Rooney; the name eventually came to be used in an official capacity by the NFL.

The Rooney Rule went into effect in 2003. That year, the NFL fined Detroit Lions’ president Matt Millen $200,000 after he failed to adhere to the rule when hiring a head coach.

Over time, the NFL expanded the Rooney Rule to apply to the hiring process for other front-office positions, such as general manager. The Rooney Rule was also extended in 2016 to apply to female candidates in NFL executive hires.

In February 2022, the Rooney Rule became the subject of renewed discussion and media attention after former Miami Dolphins coach Brian Flores filed a class action lawsuit against the NFL alleging discriminatory hiring practices. Flores, who is Black, filed the suit after receiving evidence that the New York Giants had already decided on a new head coach before even beginning a scheduled job interview with him. Flores alleged that his interview was a “sham” that was only done so the Giants could comply with the Rooney Rule. Flores also alleged a similar experience during a past interview with the Denver Broncos. Flores’s suit described the Rooney Rule as being “well-intentioned” but ineffective.

Critics of the NFL have noted that the Rooney Rule has failed to significantly increase diversity among NFL coaching staffs and executive offices—a failure they often blame on a lack of commitment among NFL officials to legitimately enforce the rule.

Goldman Sachs Implements Its Own ‘Rooney Rule’ in Diversity Push

Liz Hoffman, Wall Street Journal (Headline), March, 2019
I think that’s what the Rooney Rule speaks to, equality within the opportunity ... We’ll continue to fight for that, not only in terms of head coaching searches, but maybe other areas of the profession as well.
Mike Tomlin quoted by Gerry Dulac, Pittsburgh Post-Gazette, April ,2019 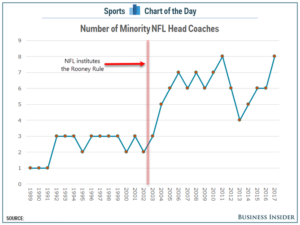 Roger Goodell will ultimately decide whether the Browns violated the Rooney Rule and if so what discipline they'll face.

Given Goodell's approach to discipline, that means this could be swept under the rug, or Goodell could strip the Browns of the first pick in the draft.

This has been a problem for a long time and the Rooney Rule hasn’t fixed it! https://t.co/PbxlOTRBiv

Some have called for other sports leagues to adopt their own form of the Rooney Rule.

It's time for the NBA to adopt the NFL's Rooney Rule. https://t.co/jPXmV1UEq3

Purkiss: PFA should use Rooney Rule when choosing next CEO https://t.co/WhN2fA38cB

This is not meant to be a formal definition of Rooney Rule like most terms we define on Dictionary.com, but is rather an informal word summary that hopefully touches upon the key aspects of the meaning and usage of Rooney Rule that will help our users expand their word mastery.