What does Shark Week mean?

Shark Week refers to the Discovery channel’s popular week-long television special on sharks. It is also slang for menstruation.

Where does Shark Week come from? 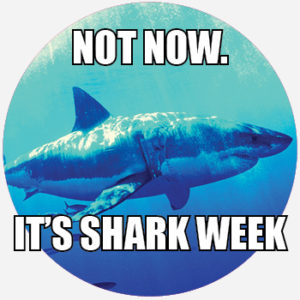 Discovery’s Shark Week debuted in 1988. It aired in July, apparently to take advantage of the beach season and increase suspense in the audience. The first show was Caged in Fear, scheduled with a lineup of nine other shows. The program was incredibly successful, with ratings nearly doubled from the average primetime content on the channel.

The program became an annual summer event, growing in popularity and gaining celebrity sponsors and notable tie-ins. In 1994, the program gained its first host Peter Benchley, author of Jaws. In 2001, one of its shows aired the first footage of sharks breaching ever seen on television. In 2006, Shark Week got a mention by the sitcom 30 Rock, when Tracy Morgan’s character gives the advice to “Live every week like it’s Shark Week.” This expression soon became a catchphrase for living life to the fullest. A former executive producer of Shark Week described the 30 Rock reference as a “big moment.” The program has continued to be extremely popular, earning a record average of 2.5 million daily viewers during Shark Week 2015.

Shark week as a slang for a women’s period first appeared on Urban Dictionary in 2005. While the Urban Dictionary entry might have had misogynistic undertones, the term has since been embraced by many women who use it humorously or colloquially.

“# 1 fear while petsitting during shark week is gettin blood on other ppls bedsheets and FOLKS GUESS WHO'S BEEN UNLUCKY WINNER LAST 2 MONTHS”
@tam_thing Twitter (March 8, 2017)
“The shark week episode about Megalodon amazes me every time ”
@dj_kayyeee Twitter (May 25, 2017)
“Shiffman is alluding to the fact that forgery and deception seem to have become par for the course for Discovery and Shark Week.”
Christie Wilcox, “Fraud, Deception and Lies: How Discovery’s Shark Week Became the Greatest Show on Earth,” Discover (July 18, 2014)
SEE MORE EXAMPLES

Shark Week has come under some criticism from scientists, who have charged that its sensationalist programming misrepresents, sometimes deliberately, sharks as extremely dangerous risks to humans. Discovery’s representatives have countered this by saying that they strive to create awareness for sharks and support conservation efforts while providing entertaining content to its viewers.

This is not meant to be a formal definition of Shark Week like most terms we define on Dictionary.com, but is rather an informal word summary that hopefully touches upon the key aspects of the meaning and usage of Shark Week that will help our users expand their word mastery.