What does Sharingan mean?

In the anime and manga series Naruto, the Sharingan is an ability that allows a ninja to copy, by mere sight, their opponents’ techniques while gaining incredible reflexes and perceptive abilities.

Where does Sharingan come from? 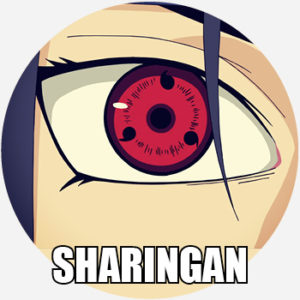 The first mention of Sharingan occurs in the Naruto manga when the character Kakashi used his to save his students from an enemy. Sharingan is a transliteration of the Japanese 写輪眼, which literally means “copy wheel eye.” The Sharingan is so named because it directly affects the eyes, causing them to turn red with black, comma-like patterns, called tomoe. An advanced form of the Sharingan, the Mangekyō Sharingan, may be awakened, featuring more elaborate patterns that resemble pinwheels. It also allows those in its possession to copy their opponents. It is almost exclusively limited to ninjas belonging to the Uchiha clan.

As the term is directly related to the anime and manga, it didn’t get popular until its source material did. The TV series, arguably the more accessible of the two, aired in America for the first time starting in 2005, after which interest in the series rose. It was so popular, in fact, the Naruto manga was the first manga to appear on the USA Today bestseller list. It also became the number seven top search in 2008 on Yahoo.

One factor of interest in the Sharingan has to do with one of the main characters, Sasuke. Sasuke has the Sharingan and is also a very serious, brooding character, making him popular with teens who either wanted to be him or who had a crush on him. As the series progressed, more information was revealed about the Sharingan in terms of other people who possessed it, namely plot-critical characters.

never will i forget during produce 101 at the age of 17 my maternal instincts was activated like a sharingan
@ohdugray, January, 2018
I will dye my hair grey and have a Sharingan user's eye transplanted into my skull at one million subscribers.
@Ju_Bai_Da, January, 2018
With the feats provided above, it's clear to see that Sharingan users don't have to actively "use" a Sharingan Genjutsu to catch an enemy/target in a Genjutsu.
TheVivas, Comic Vine, March, 2017
SEE MORE EXAMPLES

In the series itself, people call it the Sharingan, usually capitalized, and make reference to Sharingan users. The plural form is Sharingan. The term is referenced heavily in-universe, as the Sharingan is highly prized and sought after. As the Sharingan affords those who have it tremendous power, many other characters often talk about it in awe.

The Sharingan is popular within the Naruto fan base, particularly as a point of discussion about fan theories. People often speculate about the true functionality of the Sharingan and about other characters who may have it.

The Sharingan also features in cosplay of certain characters. Such cosplays are so ubiquitous that stores have gone so far as to create special contacts to mimic its appearance.

This is not meant to be a formal definition of Sharingan like most terms we define on Dictionary.com, but is rather an informal word summary that hopefully touches upon the key aspects of the meaning and usage of Sharingan that will help our users expand their word mastery.