Feedback
another one
asdf

What does ard mean?

For those residing in Philadelphia, ard is slang for “alright.”

For those living outside of the area, it just looks like a typo …

Where does ard come from? 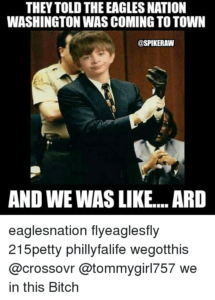 Ard emerges from Philadelphia youth slang for “alright.” Its exact origins are apparently influenced by a regional pronunciation of alright; it made its Urban Dictionary debut in 2008.

The slang came into national attention in the 2010s. In 2015, BuzzFeed published a video asking people to guess the meaning of Philadelphia slang, including ard. In 2016, the rental website Whose Your Landlord featured ard in its article “12 Words You Need to Know if You Live in Philly.”

Before the 2018 school year, the School District of Philadelphia handed out a guide compiled by students to new teachers detailing popular slang (including ard) they might hear around campus. The idea was to facilitate better student-teacher relationships. That’s ard by us.

so its just gone be one bad day after the next? oh ard
@khristianity__, October, 2018
Ard new day to go out is Monday it’s been decided
@jthickmas, October, 2018

Ard is considered very informal and is most often found on social media, in texting, or in everyday speech. The term usually takes on one of three definitions of the word alright: as an affirmation (Ard, man!), to describe something as satisfactory (It was ard), or as a discourse marker (Ard let’s do this).

My mans said “can I get a picture with you, I’m white boy Rick. Look at my Gucci Belt” lol I said Ard yo pic.twitter.com/MV2EsqXokK

This is not meant to be a formal definition of ard like most terms we define on Dictionary.com, but is rather an informal word summary that hopefully touches upon the key aspects of the meaning and usage of ard that will help our users expand their word mastery.