What does blaccent mean?

Blaccent, a blend of black and accent, is the imitation of Black English by non-black people.

Where does blaccent come from? 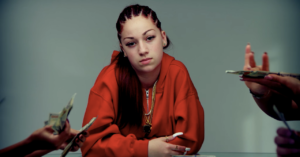 There are a lot of ways a non-black person can put on a blaccent, or a black accent. These include using slang (yaaaas queen is a frequent offender, taken from black queer culture) and speaking with a speech quality reminiscent of Black English.

Early evidence for the term blaccent comes in 2003 on internet forums to refer to black speech in general. It was used again in 2009 to talk about the way President Obama was perceived to code-switch into Black (vs. Standard) English when speaking to black audiences.

By 2010, however, blaccent began to more specifically refer to when non-black people tried to speak Black English—whether for clout or coin.

Entertainers, especially female rappers and singers, have been notably accused of adopting a blaccent throughout the 2010s. Examples include Iggy Azalea in 2015, Bhad Bhabie in 2017, and Ariana Grande in late 2018. Actress and rapper Nora Lum was also charged with using a blaccent in the hit 2018 romantic comedy, Crazy Rich Asians.

yall do not chop your words up. yall do not combine yall words. yall do not have a "blaccent" so stop trying. you dont speak AAVE. we are not yall "fam" and yall do not greet eachother with "bitchhh" etc etc yall just dont. yall never have stop wave riding.
@bubzlightyear, February 2018
Lengthy features in Variety, the Outline, and The New York Times Magazine have granted consideration to Bhad Bhabie’s savvy marketing, egregious blaccent, glorification of drugs and crime, and opportunities afforded her as a white, female, teenage trap artist, but for the most part they agree on one thing: the shit, as the Teens say, low-key slaps.
Pete Tosiello, Vulture, September 2018 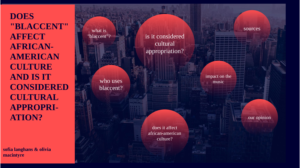 Before the 2010s, people used blaccent to describe Black English, a full-fledged dialect of the English language.

Since the 2010s, blaccent has primarily been to criticize non-black people who try to speak Black English. It’s been used in this way by such popular publications like Complex, Refinery29, Drudge Report, and the prominent Washington Post. It’s commonly seen on Twitter as well.

If you’re not a black American, you don’t want to try speaking like you are, as it’s considered a form of cultural appropriation and disrespectful of black history and experience. That said, Black English, especially its slang, has greatly influenced popular culture and, in many instances, entered mainstream slang, from cool to lit.

I just want to know why some white ppl think apologizing for racism, saying "we're all human," then putting on a blaccent is connecting.

This is not meant to be a formal definition of blaccent like most terms we define on Dictionary.com, but is rather an informal word summary that hopefully touches upon the key aspects of the meaning and usage of blaccent that will help our users expand their word mastery.