Bompton is a nickname for the Los Angeles-area city of Compton, California used by members of the Bloods gang. It can also be used to describe neighborhoods in Compton associated with the Bloods.

Where does Bompton come from? 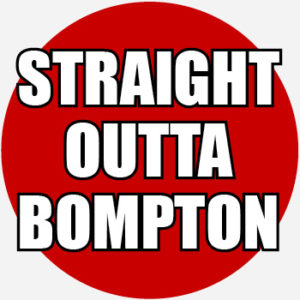 Members of the Bloods street gang have referred to Compton, California as Bompton since at least the early 1990s. A 1991 social sciences text on organized crime notes that members of the Bloods often replaced the letter C in words with a B—turning cigarettes into bigarettes or, here, Compton into Bompton—to avoid association with the Crips gang. The text also notes that some Bloods even listed Bompton as part of their addresses on their drivers’ licenses.

The rap group Bloods & Crips, made up of members of the two rival gangs, refer to Bompton in their lyrics on their 1993 album, Bangin’ on Wax. A new generation of rappers, including Compton natives Kendrick Lamar, The Game, and YG alluded to Bompton in the 2010s. For example, on his 2011 track “Ronald Reagan Era (His Evils),” Kendrick Lamar declared “Bompton Pirus ain’t nothing to fuck with.” (Pirus are a major subgroup, or “set,” of the Bloods.)

In 2016, Vice produced an episode for its music documentary series, Noisey, called “Bompton.” The episode explored Bloods-affiliated areas of Compton and its influential music scene, featuring the likes of YG and Kendrick Lamar.

Yeah u gettin yo ass whooped 😂 i got all the bloods in bompton on my side
@Rooyall_T, March 2018
But what’s a YG appearance without his patented “Bompton” sound?
Brian Alvarado, Daily Titan, February 2018
West Side Bompton, my city's been on C-SPAN / My hood's been on CNN, my hood's been on watch / My city's in the middle of Long Beach and Watts
The Game, "Roped Off" (song), May 2016
SEE MORE EXAMPLES

Outside of its use by Bloods, Bompton is used by hip-hop musicians, journalists, and fans to refer to the music and music culture from Compton, California. It’s also used by non-gang-affiliated people from Compton as a proud and allusive self-identifier.

This is not meant to be a formal definition of Bompton like most terms we define on Dictionary.com, but is rather an informal word summary that hopefully touches upon the key aspects of the meaning and usage of Bompton that will help our users expand their word mastery.