Boolin’ means “hanging out” or “chilling.” It comes from gang culture.

Where does boolin’ come from? 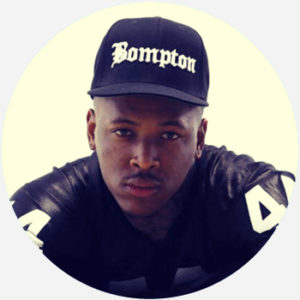 The Bloods are a gang that formed in Los Angeles in the 1970s as a rival to the Crips. As a show of disrespect and in-group code, some Bloods replace the letter C (the first letter of Crips) with a B in speech and writing. For instance, a Blood may change chocolate chip cookie to bhocolate bhip bookie.

Using this formula, boolin’ substitutes the B in coolin’ (a variation on chillin’, which means “hanging out” or “relaxing”). On his 2014 track “Old English,” for example, rapper Young Thug sings: “Catch me boolin’ with them slimes, them my youngins” (slimes is a slang term for “friend”).

Urban Dictionary’s first entry for boolin’ is from 2005. The earliest public mention of the word on Twitter was in 2008. Apart from some spikes in 2004, search interest in the word really took off between 2015 and 2016. Compton-based—or rather, “Bompton-based”—rapper YG released an album in 2015, Still Brazy, whose title features the Bloods’ letter swapping. On the album, YG replaces hundreds of other C’s for B’s, including in the middle of words, as shown in a verse like “I can’t sleep at night this shit unbomfortable.”

While boolin’ started out as a term to identify or ally oneself with the Bloods in their slang, it started to extend beyond gang contexts in 2015–16 and take on news meanings, including “to be extremely high,” “to act silly or ridiculous (as if high),” or “to do something unabashedly.” In these senses, boolin’ is used in expressions like straight boolin’ and boolin’ on Mars. The latter is sometimes intensified as straight boolin’ on Mars, which is used in a number of memes.

Boolin’ is also used in two other phrases. The first, and most often mocked or misunderstood, is boolin’ in the but, which uses Bloods’ letter replacements for chillin’ in the cut, or “hanging out in one’s house or driving around in one’s car.” Another is boolin’ at the bando, where bando is slang for an “abandoned house, typically where drugs are sold.”

Given its gang culture history, boolin’ and other B-replaced words are sometimes used to denigrate African Americans. It’s been also appropriated by non-Bloods members who may not be aware of its gang-related roots.

Boolin’ is sometimes shortened to bool, for “cool.”

This is not meant to be a formal definition of boolin’ like most terms we define on Dictionary.com, but is rather an informal word summary that hopefully touches upon the key aspects of the meaning and usage of boolin’ that will help our users expand their word mastery.