What does book it mean?

Great deal on that flight to Paris? Book it. About to get caught somewhere you’re not supposed to be? Book it. Book it can mean “to reserve (something)” or “move quickly” or “flee.” “Book it can also refer to “making a bet” on something, especially a sports contest.

Where does book it come from? 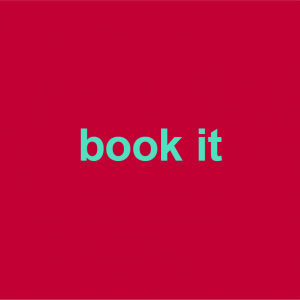 The word book as a verb has many meanings, one of which is “to record or register” something, such as officially placing a bet on the books. This sense is found as early as the 1200s. In the 1700–1800s, the meaning of book expanded to “reserving” something generally, such as a table at a restaurant, e.g., I booked it for 7:00 pm.

Book it for “running away quickly” originates in the 1930s Black slang expression bookity-book, meaning to imitate all the noise of scampering away.

By the 1950s, bookity-book was apparently shortened to book and took on the meaning of “to move quickly” in youth slang. This sense, it has been suggested, was influenced by boogie, slang for “move.” In the 1960s, the specific phrase book it emerged for “fleeing a scene,” usually on foot and to evade getting in trouble, with the it sometimes dropped, e.g., We gotta book.

As early as the 1700s, book it has been used to mean “study intensely,” not unlike hit the books.

Another slang sense of book it draws on betting books, where sports bets and other wagers are recorded. Book it, here, has the sense of “bet on it” or “you can bet on it” (write it down in the betting book). The phrase is used both to refer to actual bets but also to more metaphorical assurances and predictions. Using book as a verb for “writing a bet down in a book” dates back to the 1800s.

Examples of book it

"We're pretty busy, but he picked his spot out when he booked it." / "He booked the site in person?"
Michael Lewin, Hard Line, 2016
Andrei Svechnikov will score a hat trick today. Book it.
@curran_campbell, August 5, 2020
alexa play calm my cat both my cats: get instant anxiety and book it out of the room
@kujopotato, August 1, 2020
SEE MORE EXAMPLES

Who uses book it?

Book it is an informal expression, still somewhat associated with US Black slang, often used when someone is running away from the police or some authority to avoid getting busted. It can also be used about someone trying to get somewhere in a rush, e.g., We better book it or we will miss the train, or going really fast, as an athlete.

so yall telling me @BTS_twt booked it the HELL outta LAX through a private exit and left ARMY waiting there at the main exit?…you did good, kid. you did good pic.twitter.com/KA0nVs6xEJ

The reservation book it can be used in a variety of contexts, though usually relating to restaurants, flights, hotel rooms, and other accommodations.

Plenty of book lovers may pun on book it in their love of learning and the written word.

Book it is also used to refer to various bets, especially in the sense of telling people they can book—that is, bet on, be assured of, practically guarantee—some sort of prediction a person is making.

The worlds first trillionaire will be a crypto holder. Book it.

Hoops returns. Who do you have ? Book it. @Raptors @LAClippers play for the title

This is not meant to be a formal definition of book it like most terms we define on Dictionary.com, but is rather an informal word summary that hopefully touches upon the key aspects of the meaning and usage of book it that will help our users expand their word mastery.