What does brothers in arms mean?

Where does brothers in arms come from? 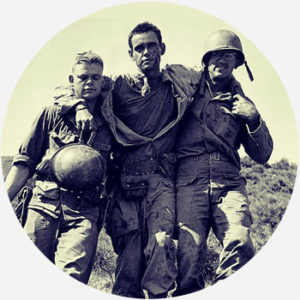 The phrase brothers in arms has been around since the 1480s for fellow soldiers and knights, perhaps modeled on the post-classical Latin frater in armis, a “brother in arms.” In the military, there’s historically been emphasis on the concept of fraternity and camaraderie among soldiers, and brothers in arms represents such a mentality.

In the phrase, arms is used explicitly in the sense of “weapons,” ultimately originating from the Latin arma, which variously refers to troops, war, and the tools of war.

Though brothers in arms originated as a means to show the unique bond between those who serve together, by at least the 1980s it was being used for strong bonds between civilian men forged by some shared experience. The expression may have expanded due to popular use for the many men who fought in World War I and World War II.

Drawing upon the meaning it has for servicemen, some men refer to one another as brothers in arms to invoke the same kind of “ride-or-die” mentality that’s commonly present in soldiers.

Examples of brothers in arms

Two years ago on September 9, my beloved husband Chris was killed in Afghanistan. As I mark this sad anniversary, my heart is with his brothers in arms.
Jane Horton, HuffPost, September, 2013
Reflecting upon their experiences, and upon the brothers-in-arms they lost on the battlefields, these elite troops offer both a celebration of valor, and a sobering, cautionary tale.
Laura Prudom, Mashable, January, 2017
Don’t waifu, don’t vidya, don’t buy into the internet echo chamber.[...]Find some guys who are brothers in arms and make real world connections. Be pushed to be better.[...] Then find a wife.
@Vladalabam1, February, 2018
SEE MORE EXAMPLES

Who uses brothers in arms?

In military contexts, brothers in arms is often used of soldiers after their time of service.

Brothers in arms has also notably lent itself to popular media. British rock band Dire Straits named a 1985 album and title track Brothers in Arms, which often plays at military funerals. First launched in 2005, Brothers in Arms is also the name of a World War II-based first-person shooter video-game series. Several novels and movies have also featured brothers in arms in their titles.

Though brothers in arms is more popular, a variant, sisters in arms, has also been used in much the same way since 1910, around the time when women were allowed to serve, though initially in non-combatant capacities.

This is not meant to be a formal definition of brothers in arms like most terms we define on Dictionary.com, but is rather an informal word summary that hopefully touches upon the key aspects of the meaning and usage of brothers in arms that will help our users expand their word mastery.