What does bruh mean?

Bruh is an informal term for a male friend, often used as a form of address. For example: Hey, bruh, can you pass me the remote?

While bruh has been recorded in Black English dating back to the 1890s, bruh spread as an interjection variously expressing surprise or dismay since at least the 2010s.

Where does bruh come from?

Slang and other forms of informal language are almost always older than you think. Bruh is recorded in the 1890s as a title before a man’s name, e.g., Bruh John. Bruh is ultimately shortened from and based on regional pronunciations of brother. It takes off a term for a male friend or a guy more generally in the 1960s. Bruh originates in and was popularized by Black English.

Bruh joins many other forms that come from brother, including bro, brah, bredder, brer, and buh—all of which have also been around far longer than you may guess, recorded as titles or forms of address in Black English throughout the 1800s. And brother itself has been recorded as a way to address a man who isn’t one’s male sibling all the way back in Old English!

Since bruh is related to and overlaps with the slang bro, it’s worth shedding some light on the development of the latter. Bro specifically spreads as a way for Black men to address one another in the early 1900s. Like bruh, it goes mainstream as an informal term for a “male friend or fellow” in the 1960s. It was not until the 1990s, though, that the stereotypical bro takes off to refer to—and often mock—a young, usually white male variously and often negatively characterized as being preppy, party-loving, egotistical, sexist, and so on.

Bruh is recorded online since at least the 1990s. Spreading in the 2010s, bruh has been used as an interjection used to react to something a fellow guy finds amazing, surprising, or exciting as well as its opposite—something exasperating, embarrassing, or questionable in some way. For instance: You got the new job? Bruh! or You left the milk sitting out overnight? Bruh. Similar bruh words like dude and man are used in the same way. This bruh notably has been used in memes, GIFs, images, videos, comments, and other content on social media and forums during the 2010s and on. 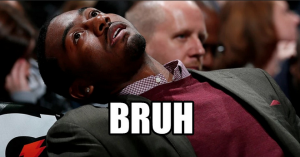 I never met a magician that wasn't creepy af. They try to swag em out on tv. Nah bruh
@wizkhalifa, December 29, 2013
An additional Teen Mom fan wrote: "Bruh why it look like her face got stung by a bunch of bees?"
Lisa McLoughlin, The Sun, October 19, 2020

Bruh remains used as a term of address for a (usually male) friend or person in Black English. While originating with and popularized by Black men, bruh is also especially used by young white men and young women.

Praying for all my college students. It’s rough out here bruh

Like many other terms taken from Black English, including bro, bruh has even become an expression now popularly associated with certain young white male teens and college students—with, well, stereotypical bros.

This is not meant to be a formal definition of bruh like most terms we define on Dictionary.com, but is rather an informal word summary that hopefully touches upon the key aspects of the meaning and usage of bruh that will help our users expand their word mastery.