Bumbaclot is Jamaican slang equivalent to “douchebag” or “motherfucker,” often used as an interjection to express disgust or dismay. It’s also spelled bumboclaat or bomboclaat, among other spellings.

It’s an insulting vulgarity that literally refers to either menstrual pads or toilet paper.

Where does bumbaclot come from? 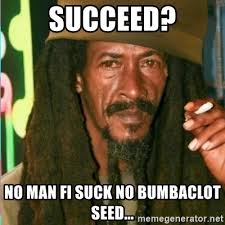 The word bumbaclot is a form of the Jamaican English bumboclaat, a term for a sanitary napkin or bathroom wipes recorded since 1956. Bombo (or bumba) likely comes from West African words like the Fante bumbo, referring to the vulva but likely similar to the English bum, or “butt.” Clot (or claat) is cloth, in keeping with Jamaican English, which often drops a TH sound for a hard T (e.g., fit instead of fifth).

Together, then, bumboclaat is literally the cloth for the nether regions—either a menstrual cloth (rather than disposable pads) or a cloth for wiping your butt (in the days before widespread toilet paper). Bumbaclot has become a common rendering of the term in the Jamaican diaspora, such as in South London.

The use of bumbaclot as an insult is said to come from members of the Rasta religion in Jamaica. Based on the Old Testament of the Bible, some Rastafarians believe that sleeping with menstruating woman is sinful. The taboo nature of menstruation carried over into Jamaican popular culture, it goes, in the form of bumbaclot as a general term of abuse. Bloodclaat (“blood cloth”) and ras clot (“butt cloth”) are variants. 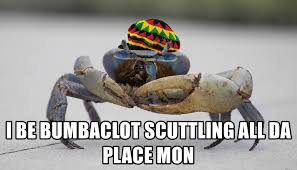 By the mid-1970s, bumbaclot was being used by Jamaicans living in New York City to mean “bullshit.” Early examples of bumbaclot to mean “fucking” or “motherfucker” surfaced in the 1980s. It never entirely went mainstream, but it became briefly part of American gangland slang in the late 1980–90s to mean “motherfucker.”

Today, like many four-letter words (think fuck), bumbaclot can be a noun (what a bumbaclot), modifier (this bumbaclot store), verb (don’t you bumbaclot me), or exclamation (Bumbaclot! I fucked up my hand). When used with a possessive adjective (my bumbaclot), it means roughly “I’m fucked,” as in you’r probably a target of violence. Bumbaclot can also refer to your partner cheating on you. The term bumbaclot rude boy taken together basically means a Rasta wanker.

In fall 2019, bumbaclot, under the spelling bomboclaat, went viral along the lines of sco pa tu mana, a nonsense phrase made popular by a Ghanaian rapper. Apparently not knowing its origins in Jamaican English, users posted bombclaat as a humorous expression of surprise, shock, and other emotions.

Happy Independence Day to the best rasssss country inna di whole bumbaclaat Caribbean 🇯🇲🇯🇲 we likkle but we tallawah !!!!
@victoriaaaxally, August, 2018
DJ Khaled might be a Palestinian-American with the major keys to the city of Miami, but for nearly nine minutes, just consider him the unoriginal bumbaclot. He and Nas took their Fugees-sampling “Nas Album Done” to the streets of the Bahamas, where they apparently stumbled upon Jamaican legend Louie Rankin, you know, just hanging out.
Dee Lockett, Vulture, September, 2016 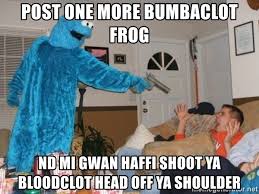 Bumbaclot is one of the most common expletives in Jamaica and among speakers of Jamaican slang, especially in Canada and the United States.

Within American hip-hop culture, the word bumbaclot has been occasionally picked up along the insult lines of “douche.” It’s also been taken as slang for a Jamaican in general, which is obviously problematic.

As you might imagine, bumbaclot is controversial—and not just when it’s used as a stand-in for all Jamaicans. For starters, it’s so rude that some claim you can be arrested in Jamaica just for using it as an insult or swear word.

But, besides its insulting nature, many feminists object to the way that that bumbaclot turns a natural part of the reproductive system—menstruation—into a sexist taboo.

When bumbaclot is used by white people, the results can be incredibly cringeworthy. A prime example comes from disgraced former Toronto mayor Rob Ford, who drunkenly slurred bumbaclot during a painful impression of a Jamaican at a takeaway restaurant in his city in 2014.

This is not meant to be a formal definition of bumbaclot like most terms we define on Dictionary.com, but is rather an informal word summary that hopefully touches upon the key aspects of the meaning and usage of bumbaclot that will help our users expand their word mastery.