What does butterface mean?

Butterface is derogatory, it just is. Usually it’s used for a woman whose body is attractive but whose face is ugly.

Where does butterface come from? 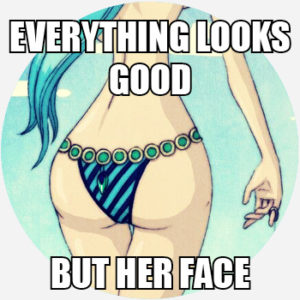 Butterface is a mashup of the pronunciation of the phrase “but her face.” The term is based on a sexist joke about women’s appearances. For example, a man might remark after a blind date that “everything about her was attractive but her face.” 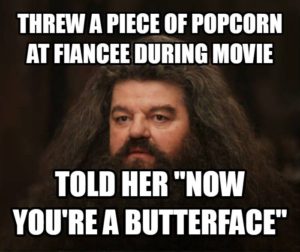 Written evidence for butterface goes back to at least 1997, when it’s recorded in black college slang as Butta Face. The slang spread among males in the 2000s. A country-rock band named Ghettobillies released an album called “Butterface” in 2000. In 2009, the term received further notoriety after being named Urban Dictionary’s “Word of the Day,” which sparked a debate about its sexist roots.

Radio host Howard Stern helped spread butterface into the mainstream when he hosted a satirical beauty competition for “Miss Buttaface” in Las Vegas in 2015.

Sorry but the gym can’t fix that butterface.
@Jayyreed1, February, 2018
no he needs the stubble and glasses to disguise his actual face put it back. get this butterfaced stranger away from me
@jocknerdromance, February, 2018
Ugly can apply to both men and women, but ‘butterface’ labels a woman only by her appearance. Men are always going to assess women’s face, legs, ass, boobs—that’s just what healthy human sexual attraction is. But labeling her based on what he considers to be her worst feature is just mean and nasty. It’s crueler still because there is no male equivalent.
Jessica Wakeman, The Frisky, July, 2009
SEE MORE EXAMPLES

Butterface is considered a sexist term. It’s often used as a noun (“She’s a butterface”) and sometimes as a modifier (“She’s butterfaced”).

Mike “The Situation” Sorrentino from MTV’s Jersey Shore is a rare example of a man who’s been labeled as a butterface, sometimes called butterface boy. The superhero Deadpool also notably refers to himself as a butterface in the 2016 film. Vice Magazine has used the term while reporting on dog breeds that are considered unattractive, too—low blow, Vice.

In early 2017, YouTuber Lena The Plug released a video titled “True Life: I’m A BUTTERFACE (Rant),” earning hundreds of thousands of views. In the video, Lena details her experience with cyberbullying on YouTube. She’s particularly concerned about comments directed toward her big nose and cites those criticisms as the cause of her negative self-image.

This is not meant to be a formal definition of butterface like most terms we define on Dictionary.com, but is rather an informal word summary that hopefully touches upon the key aspects of the meaning and usage of butterface that will help our users expand their word mastery.