G3722 is the trade identifier imprinted on the 2-milligram pill of the painkiller Xanax, colloquially referenced by recreational abusers of the drug. 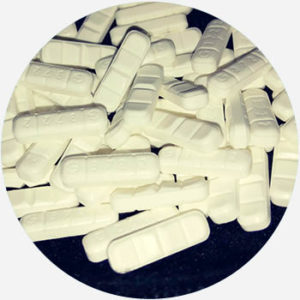 Alprazolam, best known under the trade name Xanax, was brought to the US market in 1981 to treat anxiety and panic disorders. Classified as a benzodiazepine, alprazolam was invented to be less harmful than other types of medications, namely barbiturates. Due to its sedative properties, abuse of the drug outside has been rampant since its introduction.

Distributed in generic form by Greenstone LLC, G3722 is the 2-milligram (mg) dose of this drug, the highest available for prescription, and is inscribed on the face of the pill. This variety is popular among recreational users for its euphoria-inducing effects. The dose is both commonly prescribed for medical purposes—and illegally sold for recreational use.

Also in 2016, Bob Gualtieri, sheriff of Pinellas County, Florida, held a press conference to warn both residents and tourists about fake G3722s laced with fentanyl and linked to the deaths of nine individuals.

Drowning my self with G3722 and wine because I can barely handle existing
@Jackaykay, March, 2018
Instead of saying how spiritually in tune you are and talking about stress...Go to the streets get a Xanax G3722 or a football
@LoganForbis, June, 2017
According to a statement released to BBC Three, they also seized over 250,000 tablets which consisted of counterfeit Xanax, Sandoz GG249, Greenstone G3722 and Qualitest Pharmaceuticals Inc V2090.
Ben Bryant, BBC, March, 2018
SEE MORE EXAMPLES

G3722 has spread outside the medical and pharmaceutical community as a slang shorthand among sellers, buyers, and recreational users of Xanax. While it often does, G3722 does not necessarily refer to the 2mg dose of the drug, and may be used for Xanax more generally or its many slang names, including Xan, Xanny, and Xanax bars.

The term is especially common on social media (“#G3722”), sometimes romanticized from its presence in hip-hop culture and other times as a sort of watchword among users in the know.

This is not meant to be a formal definition of G3722 like most terms we define on Dictionary.com, but is rather an informal word summary that hopefully touches upon the key aspects of the meaning and usage of G3722 that will help our users expand their word mastery.