What does Xanax bars mean?

Xanax bars are tablets of the psychiatric medication alprazolam. Xanax is the brand name of the drug, and bars is the shape of the pill.

Where does Xanax bars come from? 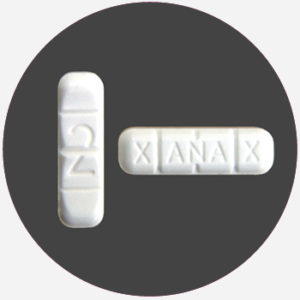 Xanax is a tranquilizer (benzodiazepines) used for the treatment of panic attacks and anxiety. It is the most prescribed psychiatric medication in the United States, according to Forbes. Because it can induce a feeling of euphoria, it is often used recreationally. The Upjohn Company, now part of Pfizer, filed for a trademark for the name Xanax in 1978, three years before it was made available to the public.

Xanax pills come in different shapes, depending on the dosage. The largest dosage comes in a long, thin bar shape that is scored, so it can be broken into four smaller doses. A full Xanax bar may constitute “two to four times an effective dose for anxiety,” according to Vice.

Combining the brand name with the shape of the pills, recreational users developed a number of nicknames for them, including Xanax bars (or simply bars in context), xanbars, zanbars, Zanzibars, zanies, or planks.

Another name for Xanax is xanny, the name of a song released by Billie Eilish released in December 2019. Eilish’s song “Xanny” rejects a youth culture that relies on drug use as a form of coping and escapism, referring to the painkiller Xanax as xanny:

Gonna drive all through the town, red wine and a xanbar / Drunk and high in his old car, singing CCR.
Mall Walk, “Pales in Comparison” (song), 2015
here’s a bed time story... the last time i was on acid i was watching the jersey shore and it made me freak out and i had to take a xanax bar goodnight
@sixty696969nine, January 2018
Manziel shared a photo on Snapchat recently that appears to show a drugs tattoo. The tattoo shows an opened zipper. Inside the zipper appears to be a Xanax bar and possibly a mushroom.
Larry Brown, Larry Brown Sports, January 2017
SEE MORE EXAMPLES

Terms like Xanax bars or xanbars are often used as slang when referring to the recreational use of Xanax. The terms may be used online in forums, such as reddit, or in casual speech.

Recreational use of Xanax appears to have grown since 2000 particularly among young adults and in rap music. A Guardian columnist called Xanax “perhaps the most fashionable drug in 2017’s rap scene,” referencing the numerous uses of Xanax bars in lyrics. For example, in the mid-2000s song “I Feel Like Dying,” Lil Wayne rapped “I am a prisoner locked up behind xanax bars.”

That said, Xanax bar is also used by people who take the medication as intended for anxiety.

This is not meant to be a formal definition of Xanax bars like most terms we define on Dictionary.com, but is rather an informal word summary that hopefully touches upon the key aspects of the meaning and usage of Xanax bars that will help our users expand their word mastery.