hell to the naw

What does hell to the naw mean?

Hell to the naw is an expressive and intensive slang way to say "no."

Where does hell to the naw come from? 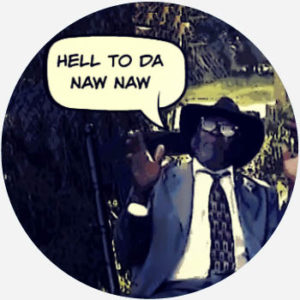 English speakers have been exclaiming hell no since at least the 1930s. Naw is a dialect variant of no evidenced in print in the late 1600s. Hell to the naw is recorded in black slang in the 2000s, notably appearing in hip-hop and R&B lyrics. The words to the, here, intensifies the phrase’s sense of rejection.

The expression was popularized in 2014 with the release of a viral song and video, “Hell 2 Da Naw Naw” by a Southern singer and pastor who goes by Bishop Bullwinkle. In it, Bullwinkle sings: “I ain’t gonna preach too long / Ain’t gonna take this service too far / My sermon in the morning / Hell to the naw naw naw,” variously repeating hell to the naw in the chorus.

The video was uploaded to YouTube in August, 2014 and went viral immediately, spawning Vine compilations and another viral video of a grandmother dancing to it. In comedic Vine videos, clips from the hook of “Hell 2 Da Naw Naw” were used as reaction images. For instance, a Vine user might show a son asking his father for some money and then play the chorus of the song as the father’s reply.

Examples of hell to the naw

There isn’t enough money in the world for anyone to convince me to get inside a casket while im alive. Hell to the naw!! Nope
@demariobell, March, 2018
When the TSPLOST of 2012 was proposed as a (doomed) 10-county transportation fix, it went down in flames. For observers who watched with crossed fingers, it’s somewhat painful to recall, but 70 percent of voters said hell-to-the-naw.
Josh Green, Curbed Atlanta, November, 2016
JPP would obviously have been a great addition, but nothing can top the acquisition of Thomas at 14. Best pick of the draft, period. I’m glad the Seahawks didn’t blow it. McShay also noted that “Seattle would love to get C.J. Spiller” but hell to the naw. Thomas all the way.
Kenneth Arthur, Field Gulls, February, 2017
SEE MORE EXAMPLES

Who uses hell to the naw?

In colloquial speech and writing, hell to the naw, as spread in the popular lexicon by Black English, is used as a dramatic way to say “absolutely not”! It’s often issued in response to an overwhelming, confusing, disgusting, or otherwise upsetting situation a speaker does not want to deal with or wishes to distance themselves from. For instance, “Beyoncé is going to be in town when I have to be away for a work trip?! Oh, hell to the naw.“.

Online, people may incorporate clips or stills from Bishop Bullwinkle’s “Hell 2 Da Naw Naw” as a humorous negative reaction to some content or to emphasize a refusal or rejection.

This is not meant to be a formal definition of hell to the naw like most terms we define on Dictionary.com, but is rather an informal word summary that hopefully touches upon the key aspects of the meaning and usage of hell to the naw that will help our users expand their word mastery.