What does Hulk smash mean?

Hulk smash is the trademark slogan of the Incredible Hulk, a Marvel Comics Universe character.

Outside of the comic universe, hulk smash has come to refer to destructive actions taken in a fit of rage.

Where does Hulk smash come from? 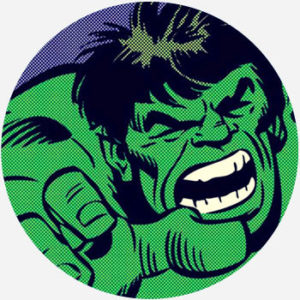 The Incredible Hulk first appeared in the Marvel Comic Universe in 1962. Since the soft-spoken scientist Bruce Banner (played onscreen by Mark Ruffalo these days) turns into the destructive green giant when he loses his temper, early comic books began associating the term smash with the Hulk—instead of merely hitting people or things, he smashed them. The word ended up in dialogue and in onomatopoeic sound effects throughout the comics.

Hulk smash as a phrase also came to be associated with the way the Hulk speaks. As linguists have noted, the Hulk speaks in pared-down language, referring to himself as Hulk instead of I, omitting articles (the and a), and using the third-person singular conjugation of verbs for all subjects.

This kind of speech as well as the caveman-like connotations of the word smash (as opposed to hit or destroy) were meant to distinguish the Hulk’s mind and body from that of Bruce Banner.

Hulk smash – or, failing that, send strongly worded e-mail messages to Web site!
Dave Itzkoff, The New York Times, July, 2010
“I have much love for these authors + have met several of them many times and nothing but respect for their work. BUT (and it is a BIG but)... this blog post is tone deaf to the entire #wndb campaign and is so male-centric that it makes me want to hulk smash the patriarchy.
@JanieH, January, 2018
alright... I think I'm a pretty level headed person but when I get woken up for a 3rd time in a row by some slack jawed yokels asking me to sell him some joints or some of my prescription meds at 5am. I have to beg satan 4 zah control na to go Bruce Banner ona mahfuka. #hulksmash
@MELT_Canada, January, 2018
SEE MORE EXAMPLES

Today, comic-book fans recognize Hulk smash as distinct from other forms of fighting. Hulk smash is the kind of destruction that comes from a childlike or simplified understanding of the world, immense strength, and a lack of control.

The phrase retains its meaning outside the comic universe. Many parody accounts take the Hulk smash phrase into other contexts, such as relatable everyday situations (“HULK NOT WORKING WITH BEST RATIO OF COFFEE TO SMASH THIS MORNING.”) or hipster culture (“GOOD THING HULK NEVER HURT NO FEELINGS, JUST SMASH THEM!”).

The colloquial and hyperbolic phrase hulk smash can be used as noun (“It was a hulk smash of a slam dunk”), modifier (“It’s a hulk smash kind of day”), and verb (“I need to hulk smash something I’m so mad”). It’s frequently stylized in all caps: HULK SMASH.

This is not meant to be a formal definition of Hulk smash like most terms we define on Dictionary.com, but is rather an informal word summary that hopefully touches upon the key aspects of the meaning and usage of Hulk smash that will help our users expand their word mastery.