Feedback
I digress
I know!

I Have a Dream speech

or I Have a Dream

What does I Have a Dream speech mean?

The I Have a Dream speech is a famous and influential speech delivered by civil rights activist Martin Luther King Jr. in 1963.

Where does I Have a Dream speech come from? 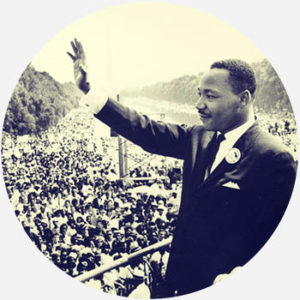 King’s I Have a Dream speech is named for its famous repetition of the phrase “I have a dream.” King delivered it on August 28, 1963 during the March on Washington for Jobs and Freedom, in which over 250,000 people converged on the National Mall to draw public attention to inequalities that African Americans still faced as part of the broader Civil Rights Movement.

Given on the steps of the Lincoln Memorial, King opens his I Have A Dream speech with a reference to the Emancipation Proclamation, which freed all slaves in Confederate states during the Civil War. King pointed out that, one hundred years after that address, African Americans were still not truly free. He went on outline the need for, and a vision of, equality and justice across the country, culminating in a stirring call for freedom with the titular I have a dream, including: “I have a dream that my four little children will one day live in a nation where they will not be judged by the color of their skin but by the content of their character. I have a dream today.”

King wrote his I Have a Dream speech in Clarence B. Jones’s house in Riverdale, New York. Jones, King’s lawyer and advisor, was instrumental in drafting the speech, which wasn’t finalized until 3:30am on the day of the event—and which didn’t include the speech’s most famous line, “I have a dream.”

The speech itself is widely praised and studied for its rhetorical power and referenced in popular culture. “I have a dream” is inscribed on the steps of the Lincoln Memorial where King delivered his famous words.

Examples of I Have a Dream speech

“The romantic aura of transformative antiracist speech captivates us. It is comforting to think that the message of love in Martin Luther King's 1963 'I Have a Dream' speech vanquished the hate behind Alabama governor George Wallace's 'Segregation Now, Segregation Forever' address delivered earlier that year.”
David Shih, “Hate Speech And The Misnomer Of 'The Marketplace Of Ideas',” NPR (May 3, 2017)
“Like King, I have a dream for the world: that one day soon all the narcissistic, nationalist, isolationist ramblings of our current times will disappear. I have a dream that instead there will arise a global awareness that we are of one humanity.”
Thabo Makgoba, reported by News24, “Black SA women know that black lives don't matter - Makgoba,” News24 (May 28, 2017)
“In his celebrated ‘I Have a Dream’ speech during the March on Washington for Jobs and Freedom on Aug. 28, 1963, King laid out a blueprint for how to lead and assured us that the power to do so resides within each of us.”
Benjamin Ola. Akande, “MLK: Leading Without "Authority",” Ladue News (May 25, 2017)
SEE MORE EXAMPLES

I digress
I know!
Home / Words / Slang / I Have a Dream speech