What does jeepers creepers mean?

Guess so … jeepers creepers is an exclamation you may use in surprise, exasperation, or fear, especially if there are kids around or you’re from the 1950s.

Where does jeepers creepers come from? 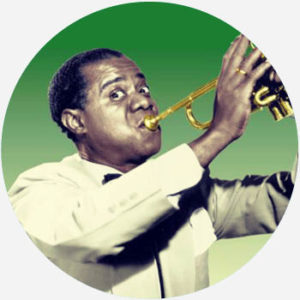 Jeepers creepers came into fashion in the United States in the 1920s or 1930s as an alternative to exclaiming “Jesus Christ!” That makes it something called a minced oath, which is a euphemistic version of a profanity.

Jeepers creepers works like other minced oaths—heck instead of hell,  shoot for shit, golly and gosh for God, jeepers creepers for Jesus Christ—because you start saying the real thing until you realize grandma’s in the room and tone it down.

The phrase and song further spread in popular imagination thanks to a 1939 cartoon starring Porky Pig who is investigating a haunted house. The cartoon, playing off the scary-sounding creepers, helped associate the expression with fear and horror, though often humorously so.

if anyone has ever seen the second jeepers creepers just know i’m on that road and i just passed a broken down bus .. ok rip

@madison_buffa, May, 2018
Jeepers, creepers, here come the peepers and the anti-peepers. Those little marshmallow chicks sell like hotcakes this time of year, and the boxes empty quickly.
Jamey Boyum, KLTV, March, 2018

Dang it! Shoot! Jeepers creepers!...Virginia law demands that residents keep it clean, even in moments crying out for the foulest four-letter words. It's illegal in this state to curse in public.

Minced oaths like jeepers creepers are safe to use among most audiences, but some Christians argue that using a euphemism for Jesus Christ amounts to the same thing as taking God’s name in vain.

Jeepers creepers peaked in use around the late 1940s and early 1950s. Using it might sound old-timey or might allude to the popular song or classic Looney Tunes cartoons that feature the song or phrase.

Some people say or write jeepers creepers due to personal style or to come across as cute—or clever, especially when punning on brands like Jeep and Peeps or talking about vision (peepers).

If you weren’t around then, Jeepers Creepers might bring the horror movie franchise by that name to mind. The first movie, released in 2001, features a man-eating monster that (spoiler alert) takes one character’s eyeballs, revealed in a scene that uses the jazz song. “Where’d you get those peepers?” indeed. 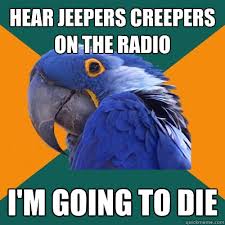 On a more serious note, the 2017 premier of Jeepers Creepers 3 was met with protests because director Victor Salva, who also directed the first two films in the series, was convicted of sexually abusing a minor in 1988.

This is not meant to be a formal definition of jeepers creepers like most terms we define on Dictionary.com, but is rather an informal word summary that hopefully touches upon the key aspects of the meaning and usage of jeepers creepers that will help our users expand their word mastery.