To do something like a boss is to do it with stylish confidence or authority. This can be applied, tongue in cheek, even to fairly mundane tasks. 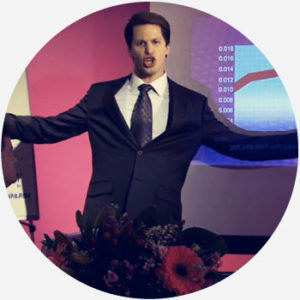 The word boss, borrowed from the Dutch, has been with American English language since the mid-1600s. Boss has long meant, and continues to mean, a “person in charge,” especially used, of course, in professional contexts. Boss has also long been a slang term for “excellent,” with evidence reaching back to the 1880s. Boss took off, though, as a youth slang term for “superlative” and the like (“That new song is boss”) in the 1960s.

To do something like a boss, or “with a swaggering skill,” then, plays with both senses of the word: the conventional one (doing something with authority) and the slang one (and doing it extremely well). The colloquial expression appears to have originated in hip-hop.

Ice Cube’s 1993 song “Really Doe” may be one of the earliest recorded uses of the expression. On that track, Ice Cube raps: “Out like a boss, with a half-pint of sauce / Got the shit sewed up like Betsy Ross.” Rappers Das EFX and Goodie Mob also used the line like a boss in 1995 and 1999 tracks, respectively. In 2001, Houston rapper, Slim Thug proclaimed “I’m the boss, when I’m flossing my Boss like a boss,” (the Boss he’s flossing, or showing off, possibly refers to a car, the Boss Mustang) on a collaboration with fellow Houston rapper E.S.G. titled “I’m the Boss.” Slim Thug went on to record a track called “Like a Boss” in 2005, featuring the rapper listing all the things he does like a boss in a call-and-response style. This inspired a viral video and song by Saturday Night Live’s Andy Samberg, which greatly popularized the phrase.

Andy Samberg’s comedy music group, The Lonely Island, parodied Slim Thug’s rap on their own song “Like a Boss” in 2009. The song was released on their album Incredibad in February, with a video starring Samberg and Seth Rogan which debuted on Saturday Night Live that April.

In the video, Samberg plays an office manager receiving his review from a superior played by Rogan. Samberg begins by describing normal managerial duties, like calling his corporate office and approving memos (repeatedly interjected with like a boss), but then moves on to describing a failed attempt to hit on an employee, a downward spiral of self-destructive behaviors, and finally, absurd actions like turning into a jet and flying into the sun.

Google searches for like a boss spiked in April 2009, showing a surge of interest in the phrase following the SNL sketch. That June, a website, instantboss.org, that plays the like a boss refrain from the sketch, appeared.

The hashtag #likeaboss began to appear on Twitter in February 2009, following the release of Incredibad, and is still being used to brag and to celebrate small victories. Like a boss is also used as an image caption in memes, especially on pictures of people or characters acting confident, like a dog reclining in an office chair or Disney’s Pinocchio smoking a cigar.

“Clean clothes put away ✔dresser emptied for baby clothes ✔house clean ✔ dinner and lunch for tomorrow made ✔I'm clean ✔ #LikeABoss”
Angela Curtin @Inch_High_PI Twitter (April 12, 2017)
“Here are nine specific, easy-to-implement tips culled from experts in psychology, social dynamics, and networking that will show you how to enter any room like a boss.”
John Corcoran, “How to Enter a Room with Confidence,” Lifehacker (May 30, 2014)
“I call shots - like a boss / Stack knots - like a boss / Cop drops - like a boss / On top - like a boss”
Slim Thug, ““Like a Boss”,” Already Platinum (2005)
SEE MORE EXAMPLES

As a meme and hashtag or as a comment in everyday conversation, like a boss conveys a sense of confidence, pride, style, and skill in the way a person has performed some action, e.g. “I wrote that term paper like a boss.” Echoing Samberg’s song, like a boss is often used as a humorous tag phrase: “I did the laundry…like a boss.”

This is not meant to be a formal definition of like a boss like most terms we define on Dictionary.com, but is rather an informal word summary that hopefully touches upon the key aspects of the meaning and usage of like a boss that will help our users expand their word mastery.