What does libtard mean?

Libtard is an insult usually used by conservative trolls online to characterize liberals as stupid.

Where does libtard come from? 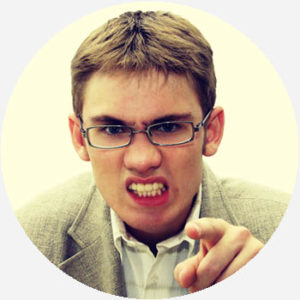 Libtard is a blend of the word liberal and the slur retard and is the result of the political polarization that has divided the United States since at least the 1990s. (It’s not just a US thing, though, as libtard sees some currency in the likes of the UK, too.)

It’s unknown who invented the term—such things are tricky to pin down—but early evidence of it online came in an Usenet group in 2004. There, when it was used in a message board on Michael Moore, the outspoken liberal filmmaker, to mock a person who was concerned about being American abroad during the War on Terror.

By 2005, it made its debut on Urban Dictionary, defined as a general insult used by conservatives and Republicans against liberals and Democrats. Since then, the term often targets liberals over political correctness, social welfare, and racial and gender equality.

For what it’s worth, a Quora user named Jeff Jenness claimed he might’ve accidentally invented the term in 2004, stating “I’m pretty sure I pulled it out of my butt back then…I was a 19 year old conservative troll back then.” Jenness  then described himself as a left-leaning moderate, so some online users might throw the libtard insult back at him.

Regardless, the term has become increasingly prevalent since the 2016 US presidential election with the rise of the vehement alt-right, pro-Trump community online. That year, Chicago Tribune writer Rex Huppke asked angry conservatives to retire the word libtard—not because it insulted liberals, but because, calling up the offensive slang retard, it demeaned people with developmental disabilities.

How This Conservative Became a ‘Libtard'
Tim Rymel, HuffPost (headline), December 2016
It's just a saying you libtard... calm your tits and go get a soy latte. Socialism will never win... go take that bullshit somewhere else.
@eignM4n, July 2018
People who use the word “libtard” are people who try and use coupons that expired 6 months ago and then ask to speak to a manager when they aren’t allowed to use it.
@mirandammoser, July 2018
SEE MORE EXAMPLES

As Rex Huppke pointed out, the real problem with the word libtard, as opposed to its cousins like snowflake, is that it makes fun of political opponents at the expense of persons with developmental disabilities. Insulting someone’s politics is one thing, but mocking disabilities is another. 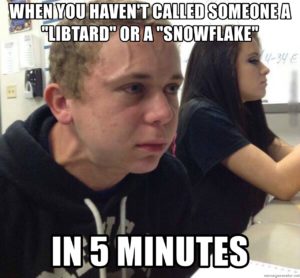 The other problem with libtard is that, as far as insults go, liberals themselves aren’t very likely to feel insulted by it. Because libtard resembles something a grade-school bully might say, it paints the user as being, well, juvenile. If you disagree with someone’s political opinions, it’s probably better to explain why, rather than dropping weird nicknames.

None of this is to overlook the fact, though, that some liberals use (the admittedly less common) right-wing counterparts, conservatard and Trumptard, which are equally problematic.

This is not meant to be a formal definition of libtard like most terms we define on Dictionary.com, but is rather an informal word summary that hopefully touches upon the key aspects of the meaning and usage of libtard that will help our users expand their word mastery.