MAC-10 is the nickname for a submachine gun, officially designated the M10, and originally manufactured by the Military Armament Corporation.

Where does MAC-10 come from? 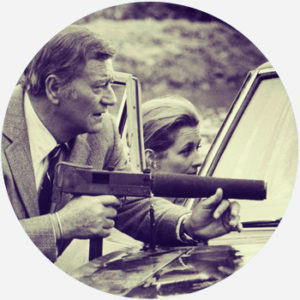 The M10 was first designed and built by American inventor and businessman Gordon Ingram. Ingram designated his first prototype gun the M5 to avoid confusion with the M3 (which was already in use by the United States military) and its potential successor, the M4. Ingram designed four more guns before building the M10, his tenth model, hence the 10 and M. Ingram manufactured the first of his Model 10 submachine guns in 1964. He joined another firearms manufacturer, Sionics, which changed its name to the Military Armament Corporation, abbreviated as MAC, in 1970. Starting in 1972, the gun was manufactured with MAC imprinted on the frame. The MAC-10 nickname combines MAC with M10.

Despite Ingram’s intentions (as reflected in the company’s ambitious name), the gun saw only limited military use. It did, however, become popular in film and television. It appeared in the 1974 John Wayne movie McQ, where it’s referred to as an “Ingram,” as well as episodes of the A-Team and Miami Vice, among many others.

The MAC-10 became associated with crime rather than military. Notably the MAC-10 was used in a drug-related shootout in a Miami mall in 1979. The New York Times included it in a guide to street guns in 1993.

The cop busted in and had a MAC-10 pointed to my dome
Ice Cube, “Once Upon A Time In The Projects" (song),1990
Keep the pace ready set brothers rollin’ out / Packin’ a Mac-10, strapped and capped him / Now who’s to blame, for the hate that hate made?
Paris, “The Hate That Hade Made”(song), 1990
Fresno Police Chief Jerry Dyer showed off dozens of guns, a Mac-10, AK-47s, sawed-off shotguns and many more. The guns were taken off the streets over the past four weeks, mostly by officers in the Multi-Agency Gang Enforcement Unit.
Sontaya Rose, ABC30 News, January, 2018
SEE MORE EXAMPLES

News stories that mention the gun often use MAC-10 rather than the official M10 name.

Playing off the gun’s gang associations, several rappers, including Ice-T, Ice Cube, and Geto Boys made reference to the MAC-10 in their lyrics from the 1980–90s. In 2016, Chief Keef released a song titled “Mac 10.” Mack 10 is also the stage name of a West Coast rapper who emerged in the 1990s.

In the UK, the MAC-10 is sometimes called the “spray and pray” due to its high rate of fire and inaccuracy. Due to this relative inaccuracy and high recoil, the MAC-10 sometimes has a reputation as an inferior or overrated gun, for all its presence in popular culture.

This is not meant to be a formal definition of MAC-10 like most terms we define on Dictionary.com, but is rather an informal word summary that hopefully touches upon the key aspects of the meaning and usage of MAC-10 that will help our users expand their word mastery.