What does mannequin challenge mean?

The mannequin challenge refers to a viral video trend in which a group of people are filmed frozen in position like mannequins.

Where does mannequin challenge come from? 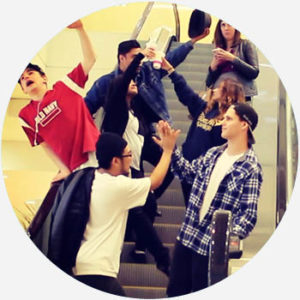 According to First Coast News, a few students at Edward H. White High School in Jacksonville, Florida had the idea in late October 2016 to film themselves standing still, posed in various ways. As one of its creators, Jasmine Cavins, told First Coast News, her friend “walked up to the front of the class and froze still,” compelling a classmate to comment she resembled a mannequin. For fun, the students then filmed a larger group of their peers holding various, natural poses. They posted their video on Twitter on October 26, and by November, the mannequin challenge went viral.

Performers of the mannequin challenge share their videos—in which the camera pans across the participants who look as if time hit the pause button—using the hashtag #mannequinchallenge. The song “Black Beatles” by hip-hop duo Rae Sremmurd frequently plays in the background.

The mannequin in mannequin challenge, as we saw, likens the pose-holders to retail mannequins. And the challenge, while nodding to the difficulty of maintaining a pose for an extended period of time, alludes to other viral video challenges—most notably the ice bucket challenge, in which people film themselves dumping buckets of ice over their heads, and then tag others to do the same, as a creative way to raise money for ALS.

While the mannequin challenge has not primarily been a vehicle for raising money, it has been employed to raise political awareness. Just after the 2016 US election, activists with Black Lives Matter created a powerful take on the mannequin challenge, reenacting police shootings of unarmed black men to highlight the treatment of black people by law enforcement.

“I loved how they did this on The Flash, everything fr Barry's point of view looks like #MannequinChallenge #TheFlash (fbfind)”
⚡flashcrewhuz ⚡ @hollyanderson30 Twitter (March 18, 2017)
“CATCH US IN STORES NEAR YOU . #Mannequinchallenge - Retweet - ig @theyscreamnaay”
@theyscreamnaay Twitter (October 27, 2016)
“The kids who make these [mannequin challenge] videos are freezing themselves in a braggy, fun moment they’ll never get back. So are the pro-sports teams that have gone mannequin during victory celebrations after a game.”
Spencer Kornhaber, “Finding Meaning in the Mannequin Challenge,” The Atlantic (November 18, 2016)
SEE MORE EXAMPLES

The mannequin challenge, most frequently used as a hashtag marking videos shared online, is an activity various groups engage in for fun or to raise the profile of a particular organization or cause.