What does N2O mean?

N2O, NOS, and nitrous are all used as shorthand by car and racing enthusiasts for the gas nitrous oxide.

NO2, sometimes confused with N2O, can refer to nitrogen dioxide, a pollutant in car exhaust or a type of fuel used in car engines that utilizes nitrous oxide.

Where does N2O come from? 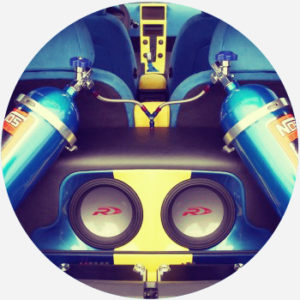 Nitrous oxide—the same “laughing gas” used as a dental anaesthetic and as a recreational drug in the form of “whippets”—was used in aircraft in World War II to provide additional oxygen to the engine and increase power. According to Hot Rod magazine, auto-racers adopted this technology in 1961. N2O is the gas’s molecular formula in chemistry, formally written as N²O.

In the 1970s, the company Nitrous Oxide Systems (NOS for short) was founded, specializing in the technology. The brand was featured in Road & Track in 1982. By the mid-1980s, nitrous was in use as shorthand for nitrous oxide. By the early 1990s, NOS was used to describe the gas itself, acting as a generic term for nitrous oxide in addition to a brand name. Beginning in 2001, NOS was referenced in the Fast and Furious movie series, in the generic sense as well as in product placement. In 2005, NOS licensed its brand for an energy drink by the same name.

Nitrogen dioxide, or NO2 or NO², was known to scientists by the late 19th century. The gas was known as a pollutant by 1965, when the Journal of the Air Pollution Control Association discussed emissions standards for the chemical, among others. A company called VP Racing Fuels also produces a high octane fuel under the name NO2, designed for engines using nitrous oxide.

no need to tune your car. Just add some n2o broo and you'll be flying soon hahahha
@aimanmaman, August, 2013
I dont use NOS cuase i dont want to blow up my car You fuck it doesnt work like that
@Sexybeastdaniel, January, 2018
Some nitrous installs can see a pickup of 80-150 hp, sometimes with an even greater improvement in torque.
wpengine, Hot Rod Network, 2007
SEE MORE EXAMPLES

Nitrous and NOS are often used by car enthusiasts and in the racing community, where the latter acronym is colloquially pronounced like “noss.” N2O is used by these groups but also by others including doctors. Due to its popular use, the originally proprietary NOS has become a genericized term for nitrous oxide.

NO2 is sometimes mistakenly used in place of N2O to refer to nitrous oxide, although it is the molecular formula for a different chemical.

This is not meant to be a formal definition of N2O like most terms we define on Dictionary.com, but is rather an informal word summary that hopefully touches upon the key aspects of the meaning and usage of N2O that will help our users expand their word mastery.