or you nailed it

What does nailed it mean?

Nailed it is an expression used to comment on the successful, skillful, or clever completion or performance of something. It’s often used sarcastically in reference to efforts that comically failed.

Where does nailed it come from? 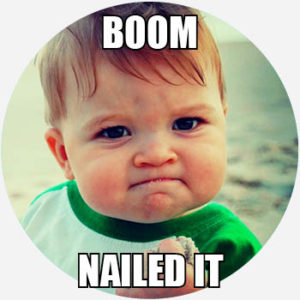 To nail something, among many other meanings, is to do it very well, e.g., “Wow, you really nailed that debate last night!” This slang dates back to at least the 1970s, according to Green’s Dictionary of Slang. In order to successfully drive a nail into a surface, it’s not enough to simply hit the nailhead—you must hit it just right so that the nail goes in straight. That’s the real-world sense behind nailed it. It’s related to the idiom hitting the nail on the head, used to mean you’ve said or done the exact right thing.

Two other expressions with nail that allude to finality or completion in some way are driving a nail through someone’s coffin (literally or metaphorically marking the end of something) and nailing something down (making something fixed and certain). The phrase to nail something, like a skillful jump shot in basketball, spread particularly in sports commentary in the late 1990s.

Interjections like Nailed it! or You nailed it! can also be more general, with it standing in for any task or challenge at hand. If you made a cake, for instance, and did a great job of decorating it, you might exclaim Nailed it! as a celebration of your success. Or, if you made a particularly messy job of it, you could use the expression sarcastically. The ironic nailed it has been in use since at least 1998, possibly emerging from its use in sports.

Late in 2010, the forum r/NailedIt on Reddit was launched, celebrating spectacular failures with the caption nailed it. This specific use, to highlight the absurdity of something that went really bad, has grown in popularity over the early 2000s. Compilations of these nailed it images—for instance, of a botched effort to imitate a celebrity hairstyle or make a fancy recipe found on Pinterest—have become popular on humor websites.

Examples of nailed it

“I'm gonna tape myself opening a box of random things, put it all over social media & expect someone 2 pay me for it. #businessplan #nailedit”
Andy Lopez @AndyLoTweets Twitter (April 16, 2017)
“Just like grandma use to make. Going to make this again in a few week [sic] for sure. #easterfood #rainbowjello #lechera #nailedit”
Lina Kurucz linakurucz Instagram (April 17, 2017)
“They don't always get it wrong. According to AC, I'm a damsel in disarray. Nailed it.”
WhatserName™ @IamEveryDayPpl Twitter (April 12, 2017)
SEE MORE EXAMPLES

Who uses nailed it?

Nailed it is often used as a sarcastic caption added to photos of craft projects, cooking experiments, photo recreations, and other similar efforts that turn out very badly. Usually, a photo of the goal is juxtaposed with the effort that nailed it for humor. For instance, a photo of beautiful melted crayon art might be shown alongside a photo of the poster’s rather misshaped efforts to replicate it, captioned nailed it.

Nailed it is also often used as a hashtag—#nailedit—on social media sites such as Tumblr, Instagram, and Twitter. This can be either sincere, to celebrate an achievement, or sarcastic.

A related term is fail, used in this context as a noun. Fails, often used with a specifier such as Pinterest fails or baking fails, are what is highlighted on communities like r/NailedIt. A nailed it is sometimes used a noun phrase to describe nailed it fails.

This is not meant to be a formal definition of nailed it like most terms we define on Dictionary.com, but is rather an informal word summary that hopefully touches upon the key aspects of the meaning and usage of nailed it that will help our users expand their word mastery.