What does naked otter mean?

Outside occasional literal references to hairless or shaved otters, a naked otter is a slang term for nude pictures of a slim, hairy gay man.

Where does naked otter come from? 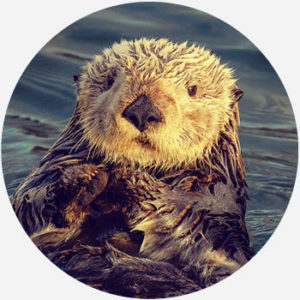 Use of different animal species to categorize gay body types and personalities traces back to 1979, when George Mazzei published an article entitled “Who’s Who at the Zoo?” in The Advocate magazine.

Although the terms may have been in casual use before this article, Mazzei’s article popularized seven different classifications for gay men, most notably the bear for a large, hairy, masculine man.

The otter was not included in Mazzei’s original article, but term began appearing in the 1980s, most likely as an offshoot of bear. As a rule, otters and bears are both hairy, but otters are generally slimmer and smaller than bears.

A naked otter, in subsequent gay slang, is either an otter posing nude or an otter who has recently shaved their facial or body hair. April, 2017 briefly saw a meme called “Do Not Google Naked Otters,” aimed at pranking people into unwittingly looking up pictures of naked gay men.

Naked otter sitting in a car at a level of horny that demanded I stick my pole in someone as soon as possible.
@musk_ebooks, January, 2018
one time in art class everyone turned on airdrop so i could airdrop the vocabulary terms and ppl kept airdropping stuff and it was a war it was like memes and penises eVERYWHERE “NAKED OTTER”
@thestars_har, November, 2017
We took the half-naked otter handyman of Timbers (not to be confused with the half-naked muscle-bear handyman of Sunfair) and his monkey-man hobby photographer boyfriend. Down the trail to the water and the picturesque rock formations that give the place its name: the cool hole already hosted a half dozen hippies, a few cute naked nature boys, a woman-and-kid or two and some dogs.
The Gay Highway Men (blog), July, 2010
SEE MORE EXAMPLES

Naked otter enjoys colloquial, friendly, and often playful use within the gay community, and it is especially used of pictures or videos. However, the term may be considered offensive if used to mock a person, especially if used as a slur against gay people.

This is not meant to be a formal definition of naked otter like most terms we define on Dictionary.com, but is rather an informal word summary that hopefully touches upon the key aspects of the meaning and usage of naked otter that will help our users expand their word mastery.