What does nappy hair mean?

Nappy hair is historically used as a derogatory term to describe the hair of Black people, especially women, many of whom have re-appropriated the term.

Where does nappy hair come from? 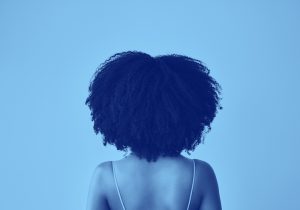 Although textured hair goes by many names, such as curly, kinky, or coily, nappy hair is specifically used when speaking about the hair of Black people. The term has historically been a racist term.

The word nappy is evidenced since at least the 1880s, an adjective form of nap, a term for the raised fibers on a fabric. Nappy, then, may have originated in pejorative reference to the frizzy texture of cotton picked and prepared by people who were enslaved.

During the 20th century, many Black Americans embraced African aesthetics, including the very natural hair many white people previously disparaged as nappy. By the 1990s, nappy hair was seeing increasing use in popular Black media—and reclamation, especially by Black women. Aliona L. Gibson published a memoir, Nappy: Growing Up Black and Female in America, in 1995, and Carolivia Herron published a children’s book, Nappy Hair, in 1997.

Even as the natural hair movement was underway among Black women in the 2000s, nappy hair still carried a powerful racist and misogynist force, especially in the mouth of non-Black woman. In 2007, radio personality Don Imus caused outrage when he called the Rutgers University women’s basketball team “nappy-headed hoes.” His remarks led to the cancellation of his show.

In November 2020, Noah Cyrus (sister of Miley Cyrus) used the term about Candace Owens on her Instagram. Owens had commented on a recent Harry Styles’ Vogue cover shoot in which he wore a dress. Cyrus responded to Owens’ critiques by posting on her Instagram: “he wears this dress better than any of u nappy ass heauxz.” Later, on December 3, 2020, Cyrus apologized on her Instagram, writing: “i am mortified that i used a term without knowing the context and history, but i know now and i am horrified and truly sorry.”

Despite such instances, Black women continue to reclaim the word. Many natural hair blogs and YouTubers incorporate nappy in their social-media handles and otherwise use the word in a positive way for their own hair.

I'm sure moms are mad everywhere because nappy hair is trending now.
@mytrunkpopwilly, December, 2013
I love my nappy hair from the coconut oil to its luxurious spirals of beauty...
@kioragrady, March, 2018
Both Latin American and U.S. media markets mostly ignore darker Latinxs with nappy hair. Black Latinxs are rarely cast for Latinx roles, because the “stereotypical” Latinx is light, with smooth or wavy hair.
Juliana Pache, The Fader, September, 2017
SEE MORE EXAMPLES

In general, a white person characterizing the hair of a Black person as nappy or nappy-haired is widely considered very offensive, if not racist. Some Black communities may also find it inappropriate for Black people to use the term.

Nappy-ass hair is an intensified colloquial form commonly heard or seen, and can be used both pejoratively and positively, depending on the speaker.

As noted, the term is mostly used of the hair of Black women (and occasionally Black men, often of beards), many of whom have increasingly worked to discharge its racist and misogynistic power through re-appropriation. Among such women, nappy hair may refer to knots and tangles naturally occurring in their hair type and is used especially for the hair of young children.

On social media, Black women may even celebrate their hair with the phrase in a nod to the racism against natural Black hair (e.g., I love this nappy hair of mine).

Occasionally, non-Black people will innocently use nappy hair for their own hair, but be very mindful of the loaded history of the term, as some in the Black community consider nappy like another N-word. Words like coily, kinky, curly, or natural are often preferred.

This is not meant to be a formal definition of nappy hair like most terms we define on Dictionary.com, but is rather an informal word summary that hopefully touches upon the key aspects of the meaning and usage of nappy hair that will help our users expand their word mastery.