What does Murphy's Law mean?

Where does Murphy’s Law come from? 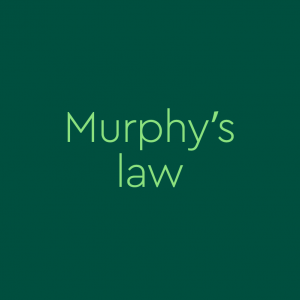 Murphy’s Law is usually attributed to Captain Edward Murphy, who served at Edwards Air Force base in 1949. As the story goes, Murphy complained about one of the technicians serving under him on a project studying the effects of deceleration on people: “If there is any way to do it wrong, he’ll find it.” The “wrong” here referred to wiring a transducer on a rocket sled. (That actually does sound like rocket science to us, poor guy.)

Of course, the idea that “things fall apart” predates Murphy. Accidents, cynics, and entropy have been around longer than aviation. Similar expressions to Murphy’s law—”anything that can go wrong will go wrong”—appeared in an 1800s shipping journal and a 1908 article on stage magic.

But, the principle eventually became known as Murphy’s Law, a tongue-in-cheek riff on actual scientific laws like Kepler’s Laws or Newton’s Laws. Thankfully for the hapless technician, the law referred to the broader tendency of things to go sideways rather than to his incompetence specifically. So, at least one thing went right for him.

Connecting Murphy’s Law directly to Captain Murphy is difficult. A handful of linguists took on tracing the origins of Murphy’s law as a sort of hobbyist project—ain’t no party like a linguist party.

John Stapp, an Air Force serviceman who worked with Murphy on the rocket sled project, is sometimes credited with popularizing the phrase when he used it at a press conference. David Hill, who also worked on Murphy’s project, corroborates the story of Captain Murphy and the incompetent tech. For a time, Edwards Air Force Base even recounted the story on its website.

Early uses of Murphy’s Law appeared in aerospace articles in the 1950s. In the 1958 play The Golden Fleecing, a scientist character describes Murphy’s Law to another. While still associated with technical contexts, Murphy’s Law was making its way into mainstream culture.

I also still have a copy of the amazing book shown in https://t.co/NgEfpgTFPD – not only full of information on the @NASAVoyager missions … but also the first place where I ever saw a detailed description of the origin of Murphy's Law. Often referred people to this source …

Murphy’s Law soon gained popularity in other professions, appearing, for example, in a police journal in 1965 and a journal on printing in 1967. It seems work is where the most things can go wrong …

Murphy's Law of Old Man Soccer: Wherever it hurts is where you are going to get kicked next.
@timhanso, June 10, 2018
Murphy’s Law unfortunately translates to the world of videography—whether you’re filming weddings or news clips, documentaries or movies, something is bound to break down.
Stephanie Vermillion, Adorama, June 8, 2018
The possibility that something can go wrong is better acknowledged as the inevitability that something will go wrong. Leaders are constantly analyzing and brainstorming ways to soften the blow of Murphy's Law and keep their organizations on the path of success, with limited collateral damage.
John Drumgoole Jr., Forbes, May 18, 2018
SEE MORE EXAMPLES

In everyday speech and writing, people may blame a series of setbacks on Murphy’s Law (e.g., when someone is already running late for work and then spills coffee on their shirt). In this way, Murphy’s Law is a take on “when it rains, it pours” or the sentiment of “just my luck.”

Different professions have humorously embraced Murphy’s law as it applies to their jobs, such as Murphy’s Laws of  Teaching (“a subject interesting to the teacher will bore students”).

Murphy’s Law has also inspired variants. A National Labor Relations Board decision from 2007 noted a Connor’s Second Law that states: “If something is confidential, it will be left in the copier machine.”

Murphy’s Law can and does apply to life outside the workplace, from relationships to March Madness brackets.

Murphy's law of texting:
"Everyone except the one you actually want to text, will text you."

Milo Murphy’s Law was a 2016 Disney cartoon that follows Milo Murphy, a descendant of Edward Murphy. Milo keeps a positive outlook despite the bad luck that frequently befalls him.

In British English, the idea that “whatever can go wrong, will” is known as Sod’s Law.

This is not meant to be a formal definition of Murphy’s Law like most terms we define on Dictionary.com, but is rather an informal word summary that hopefully touches upon the key aspects of the meaning and usage of Murphy’s Law that will help our users expand their word mastery.