What does oy vey mean?

Oy vey is a phrase that expresses grief, pain, frustration, or exasperation. It is often used in and associated with American Jewish culture. A parking ticket?! I was only gone five minutes! Oy vey.

Y U NO, hunh, You're killin’ me, Smalls, Shmoop

Where does oy vey come from? 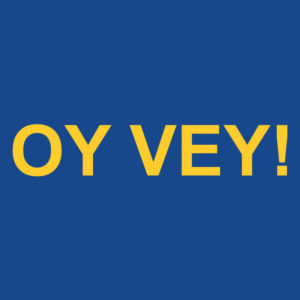 Oy vey comes from the Yiddish oy vey, which is translated and related to the English oh woe. It’s often uttered as a defeated-sounding sigh. Evidence for the phrase as borrowed into English dates back to the early 1900s.

Fewer than 200,000 Americans are estimated to speak Yiddish, making native utterances of oy vey relatively rare. However, oy vey thrives among American Jewish and non-Jewish speakers alike thanks to its appearance in popular media, especially from Jewish comedians like Larry David of Seinfeld and Curb Your Enthusiasm fame. On Seinfeld, the character Elaine (Julia Louis-Dreyfus) notably issues some choice oy vey‘s.

oy vey... one meeting after another...
@djg2theworld, February 2007
Oy vey, the Jews! Haven’t we heard enough from them already? All their kvetching about the this and the that. Well, rest assured, no one has been more surprised by how much of a spotlight British Jews have had recently than British Jews themselves.
Hadley Freeman, The Guardian, September 2018

Oy vey is sometimes shortened to oy or seen in the longer expression, oy vey iz mir (“woe is me”). Earnest uses of oy vey, outside of its role as a trope in American Jewish comedy, tends to be associated with older Jewish Americans.

Thanks to the influence of Jewish culture on American life, oy vey is used by a wide variety of people regardless of background. It comments on a horrifying, frustrating, or wearisome situation, especially one one feels resigned to or can’t do anything about.

But, of course, we can’t have nice things, so oy vey also is sometimes used in anti-Semitic content and other derogatory Jewish stereotypes.

This is not meant to be a formal definition of oy vey like most terms we define on Dictionary.com, but is rather an informal word summary that hopefully touches upon the key aspects of the meaning and usage of oy vey that will help our users expand their word mastery.