Previous Word plead the fifth
Next Word plenty of fish

What does pleb mean?

A pleb, short for plebeian, is a person who is considered too ordinary and or a thing deemed commonplace, e.g., basic and normie.

Where does pleb come from? 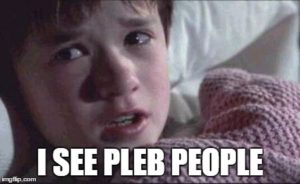 In Ancient Rome, the Plebians, or plebs, were the free “common citizens” of Rome, compared to the higher-positioned patricians, who generally enjoyed more social privileges, influence, and wealth.

English borrowed plebeian (“a commoner”) from Latin by the 1530s, adopting the more informal plebs shortly thereafter, by the 1590s. Plebs and plebeian were originally neutral terms, used historically of Ancient Rome and its populace. 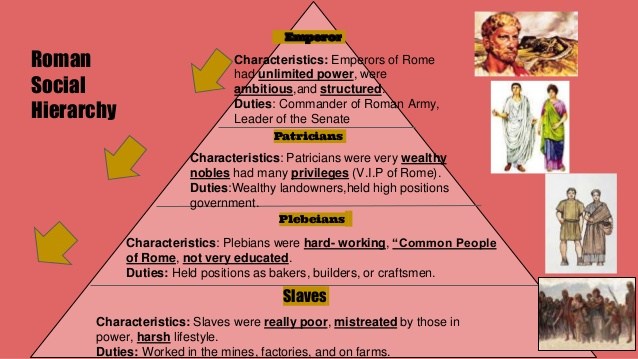 Given its socio-historical origins, it’s easy to imagine the class-conscious English making an insult of the term. By the 17th century, plebeian was being used as a less-than-polite descriptor propagating negative English views of “commoners” and the “lower class.”

By the late 18th century, we can find the shortened pleb for “an unsophisticated person.” Pleb, as a modifier (e.g., pleb tastes), is more recent, recorded in the 1970s, and is generally used pejoratively to describe people, activities, or interests considered uncultured, gauchely mainstream, or otherwise inferior.

I just got wireless headphones and everyone is a pleb now

These days, pleb is a fairly common insult. In 2012, for instance, a British conservative politician (who, for all intents and purposes, we can consider something of a modern-day patrician) called a group of police officers plebs. Technically, he called them “fucking plebs,” leading to what was dubbed Plebgate—and his resignation.

Seeing the name of Andrew 'Plebgate' Mitchell on the ballot paper today it seems apt that I'm now quaffing this while watching #BBCelection pic.twitter.com/FrPuHdhv8i

Others have more of a sense of humor about pleb, such as the British TV historic comedy Plebs. Starting in 2013, the show follows the misadventures of some very pleb Ancient Roman Plebians.

Sitting here watching videos of children with perfect pitch and wondering why it wasn’t me. I’m just a pleb that can’t tell a C from a G without a reference point.
@megamanning, December 2018
What is a pleb? And how do you know you’re a pleb? / The issue of what is a pleb reared its common head after well-groomed Perthite Terence Borgioli said he was planning to open up a swanky, upmarket bar in Subiaco that banned them.
Brendan Foster, The Sydney Morning Herald, October 2015 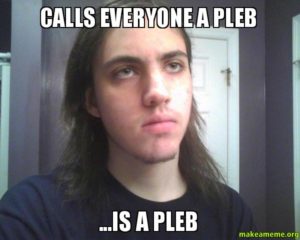 As the “Ancient Rome” part of its history implies, the word Pleb is an old one. Snooty 19th c. aristocrats liked to sling the insult just as much as the crass Reddit gamers of today do.

does this pleb realise how stupid he sounds? vegan resistance? shut the fuck up you utter mong https://t.co/mmgU5NmsBg

For the English Victorians, pleb would have definitely implied “low class.” For the modern trash-talker, pleb means “inferior” more generally, with the implication something is lacking in sophistication, quality, or knowledge in some way. Even in contemporary use, pleb is still tinged with some classism.

So, for pleb, read basic, unsophisticated, or trashy in modern slang. It’s not above self-deprecation, of course.

The chicken is too spicy for my pleb ass pic.twitter.com/bCCHxQ6dlv

This is not meant to be a formal definition of pleb like most terms we define on Dictionary.com, but is rather an informal word summary that hopefully touches upon the key aspects of the meaning and usage of pleb that will help our users expand their word mastery.

Previous Word plead the fifth
Next Word plenty of fish