or praise the sun

What does Praise the Sun mean?

Featured in the video game Dark Souls, Praise the Sun is an expression of relief, delight, or gratitude, often used humorously and accompanied with uplifted arms.

Where does Praise the Sun come from? 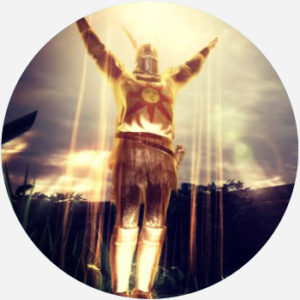 Praise the Sun comes from the role-playing video game Dark Souls. Released in 2011, it’s known for its difficulty, scariness, and bleakness.

In the game, a knight named Solaire appears to help players out on their journey. Kind, optimistic, and seen as a little cheesy, Solaire says phrases like “jolly cooperation.” He, along with his fellow Warriors of Sunlight, is also a worshipper of the sun, as his name, French for “solar,” suggests. Praise the Sun is a phrase he commonly utters accompanied by a distinctive gesture, which is known in the game as praising the sun. It consists of lifting the arms above the head in a V shape with the palms out while standing on tiptoe.

As a bit of silliness and light in an otherwise very grim game, and because it’s associated with a beloved character, Praise the Sun became popular among the fandom.

Examples of Praise the Sun

“Class cancelled three times this week praise the sun”
Ryan @r_cakess Twitter (April 14, 2017)
“10 MINUTES UNTIL THIS GOD AWFUL WORK WEEK IS OVER. #AND THEN 2 DAYS OFF #PRAISE THE SUN”
padmerrie Tumblr (April 23, 2017)
“Then, after joining Solaire’s Warriors of Sunlight covenant later in the game—and who wouldn’t—you’re gifted a glorious new gesture. You can now praise the sun.”
Lauren Morton, “Why we praise the sun: the story of Dark Souls' most famous gesture,” PC Gamer (April 21, 2017)
SEE MORE EXAMPLES

Who uses Praise the Sun?

Praise the Sun has the quality of interjections like thank God. It’s used to convey gratitude, joy, or relief for something good that’s happened. It can also be used sarcastically or with a sense of ironic resignation or despair in the face of intractable problems.

Fans might also replicate Solaire’s Praise the Sun gesture at a convention or for fun and humor.

Aside from the broader use, the Praise the Sun has become a meme among fans of Dark Souls, such as “Keep Calm and Praise the Sun.” Other examples include fan art of Solaire photoshopped over mock US military recruitment posters with the caption “I want you to Praise the Sun.” or drawings of him asking, “Do you even praise the sun?”

Before the release of Dark Souls 3 in spring 2016, many fans and reviewers cried out Praise the Sun in allusive excitement for the game.

This is not meant to be a formal definition of Praise the Sun like most terms we define on Dictionary.com, but is rather an informal word summary that hopefully touches upon the key aspects of the meaning and usage of Praise the Sun that will help our users expand their word mastery.