or your fave is problematic

What does problematic fave mean?

A problematic fave is a character or person who’s done or said offensive (i.e. problematic) things. Your fave is problematic is a phrase that usually accompanies a cited list of these offensive things. The term is used exclusively in discussions about fandom, celebrities, and media.

Where does problematic fave come from? 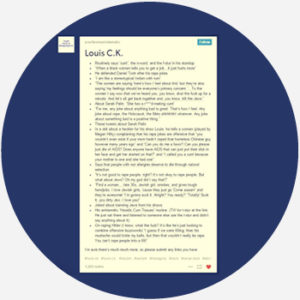 Fave is a shortened version of favorite. In the context of problematic faves, a problematic person is one who’s said or done things that might be considered sexist, racist, or otherwise offensive to a group of individuals. Taken together, a problematic fave is a well-liked person who has done some things or has held some views that are considered offensive by others. The phrase was first used on social media, mostly in discussions of pop culture figures.

The phrase your fave is problematic was largely popularized by a Tumblr blog of the same name, launched on March 17, 2013. The blog features lengthy posts, containing cited examples of a given celebrity’s problematic behavior. The blog’s first post was about comedian Louis C.K., wherein the moderators outlined offensive routines he performed, which included anti-Semitic jokes and the use of slurs. The phrase became quite popular on Tumblr, as Tumblr has a reputation for being an online space for discourse on social issues.

“No matter what happens…Mick Rory will always be my fave. Problematic fave yes. But definitely fave (after Leonard of course)”
4ft10tvlandfangirl Tumblr (January 31, 2017)
“anakin skywalker is my most problematic fave and i have no shame on admitting this”
@laurampohl Twitter (April 14, 2017)
“YOUR FAVE IS PROBLEMATIC: BILL NYE • didn’t answer my question”
blushangelic Tumblr (July 29, 2015)
SEE MORE EXAMPLES

Outside of its original, serious context, the phrase your fave is problematic is also used as a joke to contrast with the serious, and sometimes cutthroat, blogosphere. Bloggers might create lists about their favorite fictional character and title it “Your fave is problematic: [character’s name].” The list itself then proceeds to include innocuous, or even positive characteristics or actions, such as “hair too poofy,” “total goddess,” or “seems suspiciously too perfect.”

Even well-known feminists like Amy Poehler and Tina Fey have been called problematic for their jokes and actions. Naming someone a problematic fave is not a permanent condemnation; it’s a call to do better. People call their favorite actors and characters their problematic faves as a way to acknowledge that the individual has done wrong in the past, but that they still like them despite that.

This is not meant to be a formal definition of problematic fave like most terms we define on Dictionary.com, but is rather an informal word summary that hopefully touches upon the key aspects of the meaning and usage of problematic fave that will help our users expand their word mastery.