What does rat rod mean?

A rat rod is a custom car with a deliberately worn-down, unfinished appearance, typically lacking paint, showing rust, and made from cheap or cast-off parts.

Where does rat rod come from? 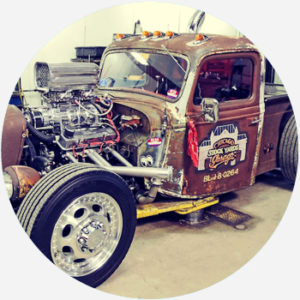 Rat rod is a variant of hot rod, a term for a custom car, usually modified from a classic car for greater speed, that has been in use since at least the 1940s. Automotive historians are uncertain of the origin of hot rod. Some claim it’s a shortening of hot roadster. Others say rod referred to the engine’s camshaft and a hot rod referred initially to a performance camshaft, or, by extension, a performance engine. In the 1930s, hot rod was also slang for an “armed criminal” or “unruly young man,” suggesting a possible connection between a fast, flashy cars and hooliganism.

Ratty, on the other hand, has been used to mean “shabby” since the 1860s. In motoring culture, rat rods were preceded by rat bikes. Rat bikes are haphazardly customized and repaired motorcycles often, but not always, painted matte black. Motorcycles in generally poor condition were being called rat bikes in enthusiast magazines in the 1970s, and the rat bike as a conscious style was in place by the mid-1980s. A 1986 book called the rat bike “a serious art form” that “demands attention.”

Hot Rod magazine editor Gary Baskerville is often given credit for coining the term rat rod to describe a hot rod built by the artist Robert Williams in the early 1990s. Williams later said of the car that it was “made to look like a heap,” with its barebones build quality and rusty shell. When Baskerville saw the car, it reminded him of a rat bike, so he called it a rat rod.

While other early examples were based on 1940s hot rods, many rat rods have since been built in imitation of the hot rods of the 1950s–60s. Some have even taken to calling hot rods in progress or running cars with ratty exteriors from much later eras rat rods, sometimes to the chagrin of their owners or to rat rod enthusiasts.

Today there are car shows and a magazine dedicated to rat rods.

Surface rust was let untouched, per the rat rodder’s credo conveyed on a windshield decal: ‘In rust we trust.’
Jim Koscs, “Rat Rod: A Statement Made of Rust,” New York Times (March 28, 2014)
Jeremey Rainey’s Volkswagen Beetle rat rod is the definition of the ‘built not bought’ slogan that so many hot-rodders live by. He purchased a rusty 1964 bug and went to work on the blank canvas.
Taylor Kempkes, Hot Rod (June 14, 2016)
I know a lot of traditional guys hate on anything post-'62 or so... But I absolutely love rat rods, and this thing kind of landed in my lap, it was the parts car of a friend's dad who had a nice one, I bought it to help him out, and he said something about how he was thinking of turning it into a 'Rat Cat' before he had to sell it.
cdsbigsby Reddit (January 30, 2014)
SEE MORE EXAMPLES

Although many hot rodders embrace the term rat rod, others prefer traditional hot rod. Like hot rodder, the owner of a rat rod can be called a rat rodder.

This is not meant to be a formal definition of rat rod like most terms we define on Dictionary.com, but is rather an informal word summary that hopefully touches upon the key aspects of the meaning and usage of rat rod that will help our users expand their word mastery.