What does rainbow party mean?

A rainbow party is a supposed sexual activity among teenagers in which girls wear different colored lipsticks and perform oral sex on boys, leaving a “rainbow” on their genitals. It’s considered an urban legend—and was a cause of moral panic—from the early 2000s.

Occasionally, a rainbow party is a different affair, such as a themed children’s party, an LGBTQ-based get-together, or a political coalition.

Where does rainbow party come from? 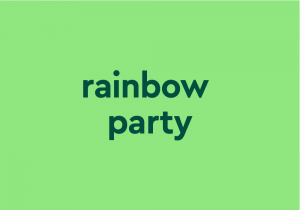 Early record for rainbow party comes from pediatrician Meg Meeker in her 2002 book Epidemic: How Teen Sex is Killing Our Kids. In it, Meeker describes a girl who is hesitant to go to such a party:

[Allyson] had heard some kids were going to have a “rainbow party,” but had no idea what that meant. Still, she thought it might be fun, and arranged to attend with a friend. After she arrived, several girls (all in the eighth grade) were given different shades of lipstick and told to perform oral sex on different boys to give them “rainbows.”

Although neither Meeker, nor any real teenagers, gave any evidence for actual rainbow parties taking place, the account caused some moral panic among parents. Further fueling the concerns, and use of the term, was Oprah Winfrey, who discussed rainbow parties in a 2003 segment on her talk show about secret teenage sexual practices.

@DipthongPrime, August 6, 2018
Now it seems like the fear is the kids themselves, that the kids themselves are going to corrupt one another or lure your kid into going to a rainbow party or trick your kid into sexting. So it's interesting that that fear has shifted. Not that we don't still have the pedophile fear, but that the fear isn't just of the outsider but the teens themselves.
Tracy Clark-Flory, Salon, September 2, 2014
My daughters fourth birthday is coming up. She wants a “magical, unicorn, dinosaur, rainbow party”. Not entirely sure what exactly that is....but my goodness....She’s getting a magical, unicorn, dinosaur, rainbow party!
@benjaminbruce, August 27, 2020
SEE MORE EXAMPLES

Even though a rainbow party is supposedly a real phenomenon among teenagers, it is mostly discussed as an urban legend and instance of moral panic among parents.

Rainbow party also finds use as a metaphor for unsafe sexual practices in general, as in the 2005 book by Paul Ruditits. Ruditis mainly shows how oral sex amongst teenagers can spread STDs. Medical surveys indicate contemporary teens are aware of the risks—and sexual rainbow parties appear to be as mythical as unicorns.

Speaking of unicorns, rainbow parties may refer to the theme of children’s parties or events geared towards the LGBTQ community (think rainbow flag). Some activist political parties have featured rainbow in their names, such as Massachusetts’s Green–Rainbow Party.

This is not meant to be a formal definition of rainbow party like most terms we define on Dictionary.com, but is rather an informal word summary that hopefully touches upon the key aspects of the meaning and usage of rainbow party that will help our users expand their word mastery.