Young queer people are redefining sexuality and attraction in their own terms, and are leading the way in how we talk about them. Read more about our expanding language of sexual and romantic orientations.

Where does 🏳️‍🌈 Rainbow Flag emoji come from? 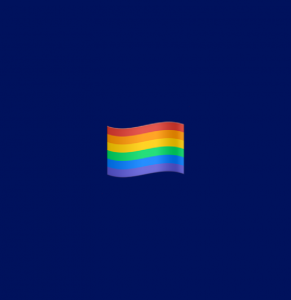 The Rainbow Flag emoji 🏳️‍🌈, also popularly called Pride Flag emoji, was added to Emoji 4.0 in 2016. The emoji is a combination of the White Flag emoji 🏳️ and the Rainbow emoji 🌈. On most major platforms, the emoji depicts a flag waving in the wind that has, starting from the top, a red, orange, yellow, green, blue, and violet stripe. On Twitter, the flag resembles a rectangle with rounded corners. The Microsoft version of the emoji depicts the flag attached to a grey flag pole.

On June 27, 2015, Noah Slater sent an email to the Unicode Consortium—the organization that approves new emoji—and requested that they officially add an emoji that depicted a rainbow flag. Slater referred to the flag as “a powerful and potent symbol of not only current gay rights struggles, but the history of gay rights in America” and provided evidence to the Consortium that the flag had been used to symbolize Gay Pride since the 1970s. Slater’s proposal gained wide support and the Rainbow Flag emoji 🏳️‍🌈 was officially approved in 2016.

How the the rainbow flag became a symbol of LGBTQ Pride

The flag that the Rainbow Flag emoji 🏳️‍🌈 depicts was created in 1978 by Gilbert Baker, who was commissioned to design the flag by famous politician and iconic gay rights activist Harvey Milk. Baker has said that designing the flag was the most important thing he ever did in his life. Baker’s original design had eight stripes, but the pink and indigo stripes were gradually removed over time.

According to Baker’s website, the eight stripes of the original design of the flag represented sex (pink), life (red), healing (orange), sunlight (yellow), nature (green), magic (blue), serenity (indigo), and spirit (violet). In modern times, the rainbow flag is often said to symbolize the diversity within the LGBTQ community.

Historically, rainbow flag have also been used a symbol of peace. Rainbow flags, past and present, have also been used a symbol for other causes around the world, such as to represent some Indigenous groups in South America. The Rainbow Flag emoji can also be used to symbolize and show support for these causes. However, the rainbow flag—and its emoji form—is most widely recognized and used as symbol of LGBTQ Pride.

Going to a Pride Parade for the first time next month & I’m very excited 🏳️‍🌈
@DesaraeRachelle, May 24, 2021
I hope my kids never have to go through what I have gone through for being LGBTQ+ 🏳️‍🌈 ❤️
@AnitaNderu, September 17, 2020

The Rainbow Flag emoji 🏳️‍🌈 is commonly used by members and supporters of the LGBTQ community.

If you decide you don’t want to watch things I’m in because of my support the LGBTQ+ community that’s fine, it’s your choice

who is your favorite LGBTQ musician? 🎶🎼🎵🏳️‍🌈

Today, we are one step closer to a future where every LGBTQ person can live their lives free from the fear of discrimination. Proud to be an original co-sponsor of this legislation.🏳️‍🌈