or netflix and chill

What does Netflix and chill mean?

Netflix is the popular TV- and movie-streaming service. Chill is a verb that, in this context, means relaxing. Netflix and chill, as a distinct phrase, means to watch Netflix with a romantic prospect, with the eventual expectation of sexual activity.

Where does Netflix and chill come from? 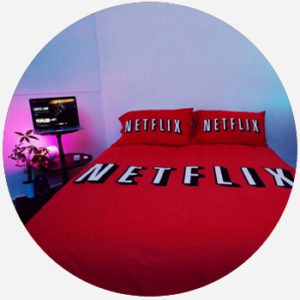 The term’s first recorded instance is in 2009 on Twitter. In this initial form, it is not yet a set phrase, simply a combination of the words Netflix and chill with their distinct definitions. This continued for a while, and variations of the phrase that amounted to “watch a movie and relax” circulated on Black Twitter. Eventually, by 2012, Netflix and chill became a set phrase, though the definition stayed the same. It was also self-referential, and not part of a request, as it would later become. At this point, it didn’t involve other parties of people.

But in 2014, the meaning evolved to include romantically chilling with another person, and, not coincidentally, it also gained reputation as a bait-and-switch. People who understood the literal sense and not the slang sense, did not realize they were being sexually propositioned until later. This led to memes in which people captioned photos or gifs of surprised reactions with things like: “I thought he meant netflix and chill,” “When you find out what netflix and chill means,” and “When he says netflix and chill and you come over and he ain’t even got a TV.”

By 2015, it was understood that Netflix and chill often meant more than just relaxing and watching a movie or show. It gained such popularity, that it entered widespread usage. Articles were written, and older people began using and trying to understand the phrase.

Examples of Netflix and chill

I'm too old for Netflix and chill. Now I want Amazon prime and commitment. Priorities.
@ladiessalwa, March, 2017
when he says 'netflix and chill' but he don't even have wifi
@otabeksyurio, November, 2016
If you are going over to someone’s house to 'Netflix and chill,' you might be doing just that, but you are certainly also going to get busy.
Nathan McAlone, Business Insider, September, 2015
SEE MORE EXAMPLES

Who uses Netflix and chill?

While the term originated on Black Twitter, as a subset of Black youth culture, it has expanded to teen and young-adult culture of all races. Based on the confusion and comedy of adults (largely parents or grandparents) misusing or misunderstanding the phrase, it’s still a younger term. Because it is innuendo, misuse of the phrase happens quite often. Rarely is the literal definition used by people who know the slang definition.

This is not meant to be a formal definition of Netflix and chill like most terms we define on Dictionary.com, but is rather an informal word summary that hopefully touches upon the key aspects of the meaning and usage of Netflix and chill that will help our users expand their word mastery.