What does siren song mean?

Siren song describes something that is very appealing and alluring on the surface but ultimately deceptive, dangerous, or destructive.

Where does siren song come from? 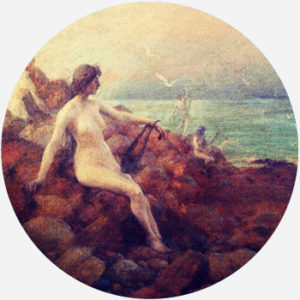 Siren song’s origins are rooted in Greek mythology. The Sirens were beautiful women with the upper bodies of humans and the lower bodies of birds whose bewitching songs lured sailors to their doom. So irresistible were their songs that sailors who heard them would be tempted to navigate the ship close to the shore and risk crashing or they might jump overboard into the water and drown.

In Homer’s Odyssey, the hero Odysseus cleverly stops the ears of his crew with wax to, keep them from hearing the Sirens’s song. He tied himself to the mast so he could hear the song yet survive. The Sirens also appear in another Greek epic poem called the Argonautica. In that the mythical master musician Orpheus helps a crew survive the Sirens’s song by drowning them out with lyre-playing.

Thanks to the legacy of Greek myth and culture on Western civilization, siren song has been a metaphor for something powerfully but deceptively alluring since at least the mid-1500s.

“I'm really glad I slept on it. It was tough to resist the siren song of infinitely variable brightness, but I did it...for now.”
Rob Johnson @MissMelee Twitter (April 15, 2017)
“When the vending machine sings its siren song. #fritos #fnltour #backrowbassett #chilicheesefritos #snackgoals”
Victoria Huston-Elem Facebook (March 29, 2017)
“Their stories are of ordinary individuals with promising careers who fell to the siren song of pseudoscience; men like Dale Graff, who had an out-of-body experience while saving his wife from drowning in Hawaii in 1969.”
Colin Dickey, “Why the United States Government Embraced the Occult,” New Republic (April 26, 2017)
SEE MORE EXAMPLES

The myth of the Sirens describes a life-or-death situation, where the siren song leads you to your doom if you follow it. Siren song is sometimes still used to describe serious situations, often political in nature. For example, some have described President Donald Trump’s message of populism and nationalism as a siren song, judging it to be galvanizing on the surface but ultimately destructive in the end. Many modern uses of the metaphor, though, are much more lighthearted. For instance, one might be lured by the siren song of junk food or an impulse buy.

Siren song is most frequently a noun. You can sing it, be tempted by it, or resist it. In addition to the usual use, though, siren song can be a verb or adjective. One can be siren-songed into something, or an argument could be described as siren-songed.

The mythological associations also make siren song a popular title for pop culture use. Poems, songs, and bands have all been named Siren Song. There’s also a personal security alarm brand with the name.

This is not meant to be a formal definition of siren song like most terms we define on Dictionary.com, but is rather an informal word summary that hopefully touches upon the key aspects of the meaning and usage of siren song that will help our users expand their word mastery.