What does sitrep mean?

Roger, Charlie, give me a sitrep at 0900! A sitrep is a status report on military activity in an area.

Where does sitrep come from? 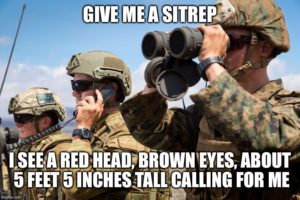 Sitrep is short for situation report and first saw extensive use during World War II. A situation report, militarily speaking, can contain anything from descriptions of troop deployments to details of the aftermath of military conflicts.

Sitrep was used as early as September 1941. British intelligence reports on the Siege of Leningrad give a sitrep on German and Soviet tank movements. Sitrep was used frequently in military documents of the English-speaking members of the Allies. The Indian Ministry of Defense was issuing sitreps in 1944 and the US military was providing numerous sitreps from the Pacific Theater in the late 1940s.

After World War II, sitrep continued to be used in numerous military documents of both the UK and US. Several US Presidents, including Dwight Eisenhower and Jimmy Carter, personally wrote sitreps during various military conflicts the US involved after World War II. 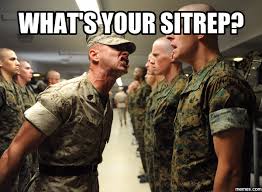 sitrep: Kings of Leon rocks, but not very charismatic thus far - giving it time
@blacktar, July 2007
For him, the resulting confusion is harrowing. For us, it’s part of the fun, like the insidery frisson of hearing nuggets of spy jargon hissed by unsmiling people in dark suits. “Alpha team, I need a sitrep, stat!”
A.O. Scott, The New York Times, July 2016 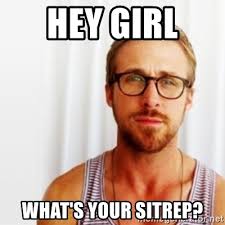 Sitrep is still used by the US military and Twitter-using veterans.

Since the 1940s, sitrep has also been used by civilians who have been exposed to the word through movies, shows, books, and games about the military. It’s increasingly used to describe general, non-military “status updates.”

well, i think its time to go raid that infernal place known as a bed, Ill be mobile in this operation, DM if y'all need a sitrep

Sitrep is was the worst perk every created in CoD, should have left Bomb Squad like in COD4.

This is not meant to be a formal definition of sitrep like most terms we define on Dictionary.com, but is rather an informal word summary that hopefully touches upon the key aspects of the meaning and usage of sitrep that will help our users expand their word mastery.