What does tbh, rate, and date mean?

Tbh, rate, and date is a social-media prompt in which someone requests friends’ opinions of them. The friends then post an honest statement, a rating, and whether they’d date them or not.

Where does tbh, rate, and date come from? 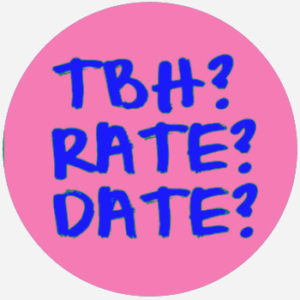 As its name suggests, tbh, rate, and date is composed of three different parts, each of which can be posted separately or all together on someone’s social-media timeline.

Tbh is an internet acronym which stands for to be honest. In this context, though, it has a more specific meaning as a noun. To post a tbh about someone is to write something about them that you honestly feel or have thought about them but haven’t ever said. In 2011, this part of the prompt developed in the form of lms for a tbh, meaning “like my status and I’ll say something sincere about you.”

Rate is another social-media prompt—again, appearing on its own, or in the full three-part iteration—in which the user asks their social-media friends and followers to rate them. Usually, this is on a scale of one to 10 (with 10 being the highest rating). The number chosen sums up the person’s looks, personality, and demeanor. Emoji ratings can also be given. In this case, the rater uses a “scale” of different emoji, mostly faces, to represent their evaluation. The commenter can then post an emoji to show how they feel about the person who posted the rating. Another associated term is bms, an acronym meaning broke my scale. This indicates that someone is so great that they are more than a 10 or beyond the measurement of any arbitrary scale.

Finally, date, also known as date or pass, involves soliciting opinions about whether or not your followers would date you. Commenters simply post date or pass.

Tbh, rate, and date was most popular on Google Trends between late 2014 and early 2016.

Examples of tbh, rate, and date

i wish i was like that i always went in super confident then got ‘tbh: you seem chill rate:5 date/pass: maybe i guess?’
@assley16, March, 2017
tbh: you seem nice idk you tho rate: 8 date: naww
@brokeboipls, March, 2017
Tbh Rate Date Since ya girls forever alone”
Ysenia Perez, Facebook, March, 2017
SEE MORE EXAMPLES

Who uses tbh, rate, and date?

Tbh, rate, and date, most used among teens and young adults, is only one of a number of social-media prompts that solicits these sorts of personal opinions. Other options, like best feature or confession, request different information but involve the same desire for affirmation, feedback, and social or romantic bonding.

Since it opens the user up to cyberbullying and damaging opinions, tbh, rate, and date can be harmful to one’s self-esteem. Rating reduces a person to a number, which can be hurtful. And, while it’s certainly possible for a friend to post about how much they like their bestie, a casual acquaintance from school can post a cruel comment, too.