Feedback
the D
The Game

or #TheDress What color is this dress?

What does the dress mean?

The question What color is this dress? refers to a photo of a striped dress, the dress, which went viral, resulting in an active social media debate for the next few days over whether #TheDress was white and gold or blue and black.

Where does the dress come from? 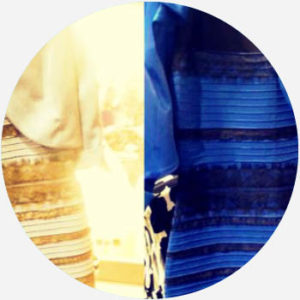 On February 26, 2015, a photo of the dress Cecilia Bleasdale planned to wear her daughter’s wedding went viral, after they brought to Facebook a personal disagreement between them about whether the colors of the dress would work with the rest of the wedding. The photo quickly spread, as more and more people discovered that the question of its color sparked instant debate.

The hashtags #blueandblack, #whiteandgold, and #dressgate, among others, were used across social media; at its peak popularity that night, #TheDress was used 11,000 times per minute on Twitter. It also became the subject of many articles and think pieces from major media outlets weighing in on the trivial nature of the dress and what the temporary global obsession with it suggested about modern existence.

Overnight, a number of celebrities tweeted their thoughts on the dress and its color scheme, including Mindy Kaling, Katy Perry, and most memorably, Taylor Swift, who wrote in a tweet that eventually was retweeted over 111,000 times that the dress made her feel “confused and scared.” Others who participated in the debate either on social media or in written pieces on the question of What color is the dress? included scientists, government officials, politicians, popular brands, and other celebrities.

The dress was eventually confirmed to be blue and black from the retailer Roman Originals. The company later announced that they would be making a white and gold version of the dress specifically for a Comic Relief charity auction.

Examples of the dress

“Everyone is saying we have to unify right now but the truth is the only thing that can unite us is another #WhatColorIsTheDress situation.”
@LaurenFlans Twitter (November 9, 2016)
“In the internet's ongoing quest to determine the exact color of everything, a set of footwear has become the newest version of #TheDress that divided a nation last year.”
Scott Stump, “The newest version of #The Dress: What color are these flip flops?” TODAY (November 21, 2016)
“Everywhere you look, people seem to be debating an all-important question that has taken over Twitter and the Internet: What color is this dress?”
Dana Ford, “What color is this dress?” CNN (February 27, 2015)
SEE MORE EXAMPLES

This is not meant to be a formal definition of the dress like most terms we define on Dictionary.com, but is rather an informal word summary that hopefully touches upon the key aspects of the meaning and usage of the dress that will help our users expand their word mastery.

the D
The Game
Home / Words / Slang / the dress