U-hauling is a sometimes derogatory slang term that refers to two women who move in together very soon after they start dating.

Where does u-hauling come from? 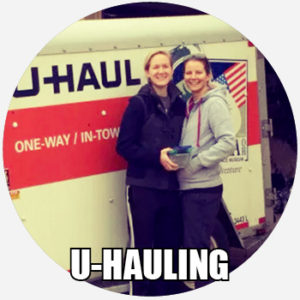 U-Haul is the trademarked name of ubiquitous rental vehicles in the US and Canada, generally used for moving possessions from an old home to a new home. The brand has become so widespread, though, that u-haul is now a generic name for any such vehicle rented for moving. In the context of lesbian relationships, however, u-hauling has taken a special meaning.

There’s a stereotype that lesbians, and other women who date women, move in together (think U-Haul) very soon—often judged as too soon—after their relationship starts. As the lesbian comedian Lea Delaria joked in the early 1990s: “What does a lesbian bring to a second date? A U-Haul.” Slang lexicographer Jonathon Green also dates the term U-haul—“a lesbian who falls in love at first sight and moves in right away with a new lover”—to 1990s gay slang.

“Not gonna lie I've been a u-haul lesbian”
Evan Nicole Brandt Facebook (August 16, 2016)
“I mean Alex is going to be u-hauled in with Maggie by that time”
anevolutionarymatter Tumblr (March 27, 2017)
“Oxytocin is great—it's what bonds us together. But too much of it just might be a recipe to disaster. Or U-hauling.”
Effing Dykes, “To Be A U-Haul Lesbian or Not To Be A U-Haul Lesbian: Almost Definitely Not,” Autostraddle (June 10, 2013)
SEE MORE EXAMPLES

U-haul can be a noun, as noted, as well as a verb and modifier; one can be a u-haul lesbian or can u-haul in with someone. The term is especially used by lesbians to judge other lesbians they think are wrongly u-hauling, though some proudly embrace the term.

U-hauling is a common stereotype about lesbian relationships. There’s been a lot of ink spilled about why this stereotype might exist and whether it has any basis in reality. Some have suggested that women emit more oxytocin than men, which promotes attachment and bonding. Others have argued that the historical oppression of homosexuality led to an “urge to merge” and a desire to find security in stable relationships, further intensified by the fact that women are often socialized to prioritize relationships.

This is not meant to be a formal definition of u-hauling like most terms we define on Dictionary.com, but is rather an informal word summary that hopefully touches upon the key aspects of the meaning and usage of u-hauling that will help our users expand their word mastery.