What does walm mean?

Walm is an archaic word referring to “gushing or boiling water,” now largely appearing as a common misspelling of the word warm … and sometimes a blend of warm and calm because we need that type of word in our lives.

Where does walm come from? 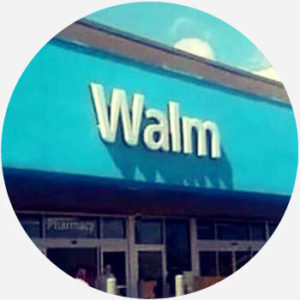 In Old English and Middle English, walm had various senses relating to water. It could mean “upwelling of water,” “bubbling of water during boiling,” or “surging of waves.” Walm was also a verb for “spout forth.” The word comes from a Germanic root dealing with heat. This walm, however, has become obsolete and appears only in obscure, archaic contexts.

In Modern English, walm frequently occurs as a typo for warm, perhaps because people associate warm with calm while writing the word or because they are influenced by their pronunciation of warm, which sounds more like wom in British English.

Walm is sometimes used an a shortened form of Walmart, the international superstore chain. Some users mis-type the name of the retailer as Walm-mart or as a humorous Walm-art.

In occasional uses, walm is a blend word of warm and calm and an abbreviation of weight and lifestyle management. The 2005 novel Punk Land, by Carlton Mellick coined its own walm for “an evil doorway created by God.” There’s one Urban Dictionary entry for walm from 2008 … it has 3 votes: “Walm – noun – mammal, known to walk the land, use computers, and write in nothing but mathematical notation.”

A great first volcano ascent or walm up for one of the bigger treks in the area.
TrekChile.com, October, 2017
Happy Friday followers! Come and visit us at St Katherine’s dock today for a walm and tasty lunchtime treat 🍽
epicurean_events, Instagram, February, 2018
A very walm welcome to the National Crime Agency’s twitter! All official photographs, announcements or anything of NCA or of any groups linked to UK + NCA will be posted here.
@NCA_RBX, February, 2018
SEE MORE EXAMPLES

Outside of instances of the obsolete walm in historical texts, walm mainly appears as a typo in printed or digital text as well as in social-media posts. And, sometimes, as a joke about Walmart …

This is not meant to be a formal definition of walm like most terms we define on Dictionary.com, but is rather an informal word summary that hopefully touches upon the key aspects of the meaning and usage of walm that will help our users expand their word mastery.