What does yiff mean?

Where does yiff come from? 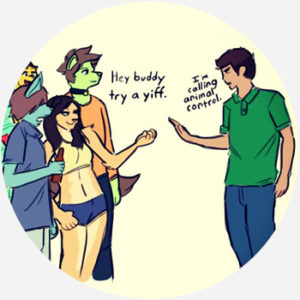 Yiff was originally an onomatopoetic word in a constructed language known as Foxish. The language and was created around 1990 by littlefox for use by fox roleplayers on FurryMUCK (an online, text-based role-playing game). Yiff was created to represent a positive, happy sound. It could be an exuberant greeting, an affirmative, and more. The meaning depended on context. Another word in the Foxish language was yipp, which had a sexual connotation. According to littlefox, some wolf roleplayers used yiff in place of yipp. After that, it became a noun, verb, and adjective to be used in sexual situations.

The term yiff was introduced to a larger group when the CSI episode “Fur and Loathing” aired on October 30, 2003. The episode mentions yiffing a few times, and is widely reviled by furries themselves because of its inaccurate information and its perpetuation of the idea that all furries are fetishists.

“I don't know how I would have accepted myself without furry art, and yes this includes the yiffing. I'm really new to the community so I haven't run into the negative side so much but I actually found it really positive and felt it made me feel a lot happier to be gay.”
Tezzy Fur Furaffinity (March 27, 2017)
“Ehh. I don't love yiff. I do look at it every now and again, but I'm not too crazy about porn either way.”
AustinB Furaffinity (February 16, 2017)
“How the hell did I manage to get so bored to the point where I followed every single person I found that posted yiff?”
Silver-Hiss @SilverHiss Twitter (April 21, 2017)
SEE MORE EXAMPLES

Yiff in hell or yiff in hell, furfag is a phrase that non-furries use to demoralize furries, possibly under the pretense that all furries are in the fandom for sexual reasons. On top of that, people who generally don’t like furries for whatever reason also use this phrase. These reasons may be rooted in misconceptions about the fandom or in one bad encounter with a singular furry that causes the person to look down on all others.

This is not meant to be a formal definition of yiff like most terms we define on Dictionary.com, but is rather an informal word summary that hopefully touches upon the key aspects of the meaning and usage of yiff that will help our users expand their word mastery.