Feedback
you're so sound
yout

What does your mom mean?

Your mom is a phrase that’s typically followed by a statement poking fun at someone’s mom. This always involves hyperbolic statements revolving around a personal trait that she may or may not possess.

Where does your mom come from? 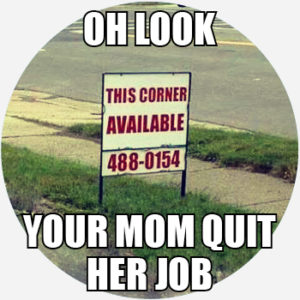 The Dozens is the game that gave birth to present-day your mom jokes. The game has existed since at the least the early 1920s, when it was referenced in Henry Troy’s song “Don’t Slip Me in the Dozens, Please.” One of his lyrics makes it clear that the game has retained its core attributes to the present day: “Slipping you in the dozen means to talk about your fam’ly folks / And talkin’ ‘bout your parents aren’t jokes.” As the song suggests, the dozens involves a back and forth of verbal sparring between two people, but played for laughs. In some versions, rhyming is involved, and in all versions improvisation is, too.

In 1939, John Dollard studied the Dozens. He found that it’s usually played by black children in urban neighborhoods and often involves a face-off in the presence of a crowd. Its attributes became important ingredients in the development of rap music, especially because word mastery is required for both. Topics that are fair game in the Dozens include appearance, style of dress, economic status, and very often, one’s mother.

Your mom jokes were an offshoot of the Dozens. This genre of jokes began to be enjoyed by a wider audience in the 1990s when the TV show In Living Color featured a sketch where game show contestants faced off against one another. These contestants played a game dubbed The Dirty Dozens and were required to insult each other’s moms in a similar fashion to today’s your mom jokes. Like the Dozens itself, it’s impossible to trace the exact origin for your mom jokes. It’s only possible to pinpoint when they became more popular.

Examples of your mom

“Your mamma so fat when she wears a yellow raincoat, people yell out 'Taxi!'”
@zxxrsh Twitter (August 27, 2016)
“Yo mama so stupid she thought Nickelback was a refund!”
Yo Mama, “100 Yo Mama Jokes - Can You Watch Them All?” YouTube (July 2, 2014)
“Yo mamma so big that she walked passed the TV and I missed season two of the show!”
IISuperwomanII, “When Someone Insults Your Mother,” YouTube (May 11, 2017)
SEE MORE EXAMPLES

Who uses your mom?

Pieces may be omitted to suit the individual speaker, but the beginning format of a your mom joke typically follows as your mom (is) so [adjective]. Its ending is always an over-exaggerated consequence in response to the first part of the joke. Typically, the adjective that follows your mom isn’t very pleasant. It tends to be something like poor, fat, or ugly. An example of one of these is “Yo mama’s so ugly that when she looked in the mirror, her reflection ran away!” There’s almost never any offensive intent behind the phrase when it’s used. Additionally, there’s a lot of variation of spelling for the phrase, but any variation will do.

Your mom jokes typically address a trait of cultural insecurity. They use someone’s mom as a target, and greatly amplify the consequences for possessing that attribute. Your mom jokes are less about someone’s actual mom and more about the fun of the banter involved and taking things to the limit. There’s also a psychological aspect; culturally, a person’s mom is sacred and speaking ill of her is taboo.

Sometimes your mom jokes even show up in anti-joke format too. The set-up will begin like a normal your mom joke, but will end in either a subversion of the joke itself or with something more realistic.

This is not meant to be a formal definition of your mom like most terms we define on Dictionary.com, but is rather an informal word summary that hopefully touches upon the key aspects of the meaning and usage of your mom that will help our users expand their word mastery.

you're so sound
yout
Home / Words / Slang / your mom