or hajji or hadji [haj-ee]

What does haji mean?

Haji refers to a Muslim who has made the pilgrimage to Mecca. Hajj refers to the journey itself, while a haji is one who has observed this central aspect of the Islamic faith.

Haji has also been used by American soldiers in the Middle East as a derogatory word for a Muslim.

Where does haji come from? 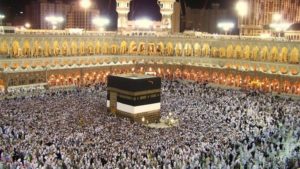 Hajj (حَجّ) and haji (حاجي) are transliterations of Arabic words that mean “pilgrimage” and “one who has completed the Hajj to Mecca,” respectively. The term hajah or hajjah (حجة) is the female version of haji. These terms have existed for centuries, appearing in the Koran and coming to the English language in the 1600s.

Originally, haji was used only in a respectful manner to refer to someone who had made the yearly pilgrimage to the holy site of Mecca in Saudi Arabia, where the prophet Muhammad was born. Someone who makes this trip during the 12th month of Islamic calendar is then given the title haji or hajah before their name, e.g., Haji Rashid.

Devout Muslims observe five so-called pillars of Islam, one of which is hajj. The others four pillars are: professing one’s belief in the religion, reciting daily prayers, giving to charity, and fasting during the holy month of Ramadan. The pilgrimage to Mecca must only be completed once during a lifetime, although adherents are welcome to return to the holy site multiple times.

Having performed #hajj twice, I witness that #SaudiArabia invested immensely in the Hajj. It facilitated for millions of #Muslims to perform their #Islamic duties w/ease & comfort. They also ensured ppl stay away from innovations & superstitions during hajj. Alhamdulillah.#Islam https://t.co/o1Sbj2y1hH

Since the 16th century, some Orthodox Christians in Balkan countries under former Ottoman rule adopted haji for their own pilgrimage to their Holy Land, Jerusalem.

Using hadji to refer to Orthodox Christian pilgrims seems to have originated in the Ottoman Empire in the 16th Century. The word, borrowed from Arabic, specifically referred to monks or pilgrims. By the 18th Century, all Turkish Orthodox Christians who made the pilgrimage to Jerusalem referred to themselves as hadjis/hajjis, although they made it very clear they were not Muslims.

Since the Iraq War began in 2003, haji has been used as an ethnic slur, much like gook was during both the Korean and Vietnam Wars. Some sources suggest haji is not always meant derogatorily and may be intended more as a colloquialism among U.S. soldiers. However, considering the sacredness of the pilgrimage among Muslims, such use of the term by non-Muslims is widely considered offensive.

Contemplating names for pet hedgehog. Liked Hagi – then found 'Haji' is used as a racial slur by US soldiers in the Middle East. Thanks guys

3 days left for Mecca. I will come back as hadji
@haripakorss, October 2007
In 1987, Hajji Erias Musoke brought him to Kampala to start supplying his life-prolonging herbs to people.
Haruna Rashid Lukwago quoted by Yudaya Nangonzi, The Observer, March 2015
All he [a soldier] has to pay for are things like haircuts, energy drinks, and the pirated DVDs the locals sell on base, which are referred to, by the way, as "hajji copies."
Elspeth Reeve, The Atlantic/The Wire, March 2012
SEE MORE EXAMPLES

The term haji is frequently used among Muslims, and online searches will yield many examples of those who have obtained haji status.

However, since the term’s derogatory use by US soldiers, one can also find many offensive and racist examples of this term on Twitter and other social media sites. Infamously, staff Sergeant Robert Bales, who murdered 16 Afghans in the 2012 Kandahar massacre, used the term haji (misspelled as hagi) in a message to a friend prior to his brutal attack.

But of course Haji is not always used with offensive intent and can be found widely in pop culture.

May Allah invite me and you for Hajji this year#

In 2017, director Zwelethu Radebe released a short film called Hajji, which takes place during the Iraq War and stars Ross Marquand of “The Walking Dead.”

This is not meant to be a formal definition of haji like most terms we define on Dictionary.com, but is rather an informal word summary that hopefully touches upon the key aspects of the meaning and usage of haji that will help our users expand their word mastery.